Amazon announced that it has opened virtual reality kiosks in 10 shopping malls to promote its Prime Day shopping event. Now you can see the Amazon VR experience for yourself. Prepare to be impressed: It’s significantly more elaborate than expected, and shows how a top retailer is transforming the future of shopping.

Rather than taking the obvious retail angle and depositing you in a computer-generated facsimile of a brick-and-mortar space, Amazon instead transports the shopper into a city filled with Prime Day products — beginning with the fun of a hot air balloon ride. Viewed through an Oculus Rift with full head tracking, the ride lets the shopper briefly see some of the brands and promotions Amazon is featuring before landing in a serene park.

Shoppers can then walk through rooms that reflect current Amazon store sections, including Bath & Beauty, Kitchen & Dining, Fashion, and Prime Video, as well as a technology-focused Living Room and toy-focused Kids Room. Each of the rooms has its own theme and sense of physical space, with the Living Room resembling one that would be found in a nice home, and the Fashion shop looking like a slightly futuristic brick-and-mortar store.

Using Oculus Touch controllers, customers can handle any product in full 3D, including clothing that can be placed on holographic people to determine fit and smartphones that can be examined from all angles with pop-up specification windows. The video shows people peering inside a refrigerator and a washing machine, handling Nerf Zombie Survival System toys, and checking out breakfast cereal boxes that look just like what you’d find in a supermarket. 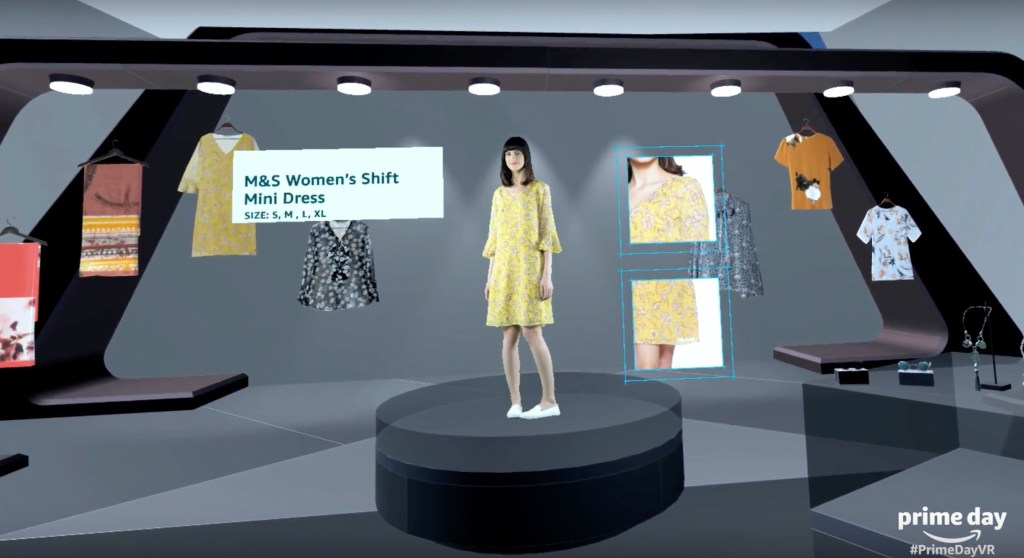 Beyond providing a clear look at the future of retail, Amazon’s VR kiosks represent an ingenious business plan. Pioneered by Amazon India, they popped up out of nowhere in 10 popular malls throughout the country and could either disappear by next week or remain in place — serving as continued enticements to convert brick-and-mortar customers into Amazon Prime members. Amazon India executives have said that they’ll evaluate feedback provided during this week to determine whether to keep the VR kiosks going.