Asgard’s Wrath is one of the full triple-A games in the works for the Oculus Rift virtual reality headset. The Oculus Studios game is a sword-fighting action adventure title set in the universe of Norse mythology.

Mat Kraemer, creative director at developer Sanzaru Games, said the VR title has more than 30 hours of gameplay, anchored by physics-based sword combat with a layering of role-playing game elements.

The game is coming this fall from Oculus Studios and Sanzaru Games to the Oculus Rift and Rift S headsets. I played a demo of a level where I was able to switch between human and god forms to solve various puzzles. Then I interviewed Kraemer about the making of the game, which comes after Sanzaru’s previous title, Marvel Powers United VR. 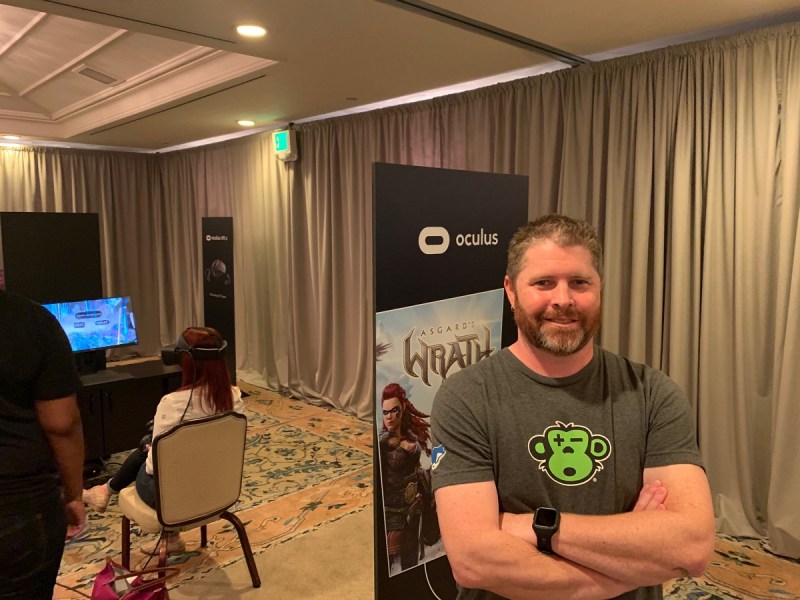 Above: Mat Kraemer is creative director at Sanzaru Games.

GamesBeat: How long have you been working on Asgard’s Wrath?

GamesBeat: Where did the inspiration come from?

Kraemer: Originally—this game has gone through a bunch of iterations. It was originally a game that was more like Lemmings, where you were the god and you’d finish these puzzles, and the character would automatically move. We added this feature where you could switch to the human scale and look back, and everyone said, “This looks so cool! This is so much fun!” Being the hero down there and going back and forth between scales. We ended up changing the entire design of the game and making it what it is today.

GamesBeat: What can you do as a human that’s interesting compared to playing as the god?

GamesBeat: The sagas are each of the worlds, right?

Kraemer: Right, it’s the world. Right now we’re just looking at one saga. If you go to another saga, you’re going to be playing as a completely different character – different moves, different abilities. Each of those characters has their own leveling path, along with their animal buddies. 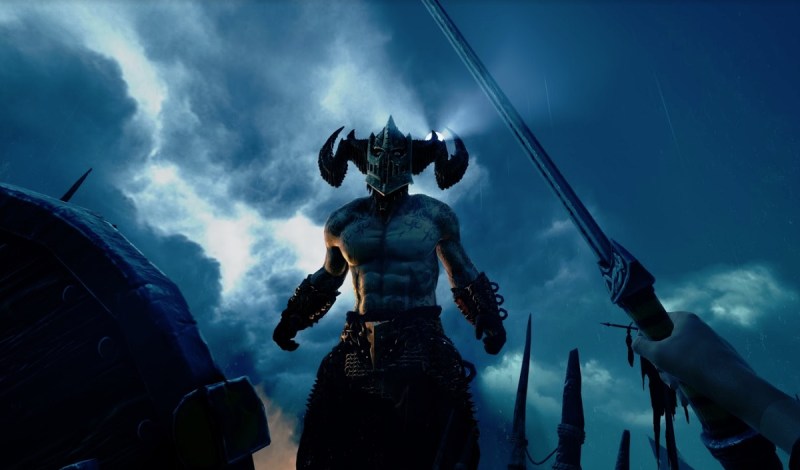 Above: Uh oh. A god battle in Asgard’s Wrath.

GamesBeat: How is this different from what you did with your Marvel VR project?

Kraemer: This is a much more progressive game. It’s telling a story. We’re looking at 30 or 40 hours of action-adventure with some light RPG elements. The narrative pulls you in from beginning to end.

We take some gameplay elements from Marvel. We have a lot of the weaponry, a lot of the full-body IK we set up in that game. But this is its own entity. It’s a full-on adventure RPG game with surprises and twists and turns, collecting all the animals to do your budding. Marvel was more of an arena-based game. You were constantly going through the loop and unlocking other content.

GamesBeat: What can you do besides just swinging a sword?

Kraemer: Doing a shield bash is really fun. If you have a shield you can bash guys and knock them back on the ground. We have bows and arrows. We have crossbows. Each of the human characters you meet have signature weapons. The first one has the very traditional sword and shield. But Ingrid also gets an axe, very similar to Kratos in God of War, where you can throw the axe and then recall it. It feels awesome in VR. We have a couple of puzzles where have to throw it out and then line it up as you bring it back to hit something on the back side. That’s a lot of fun.

GamesBeat: Which platforms are you on right now?

Kraemer: This will just be on the Oculus Rift and Rift S. It’s schedule for release in fall 2019.

GamesBeat: Is it too hard to do something like this on the Quest right now?

Kraemer: We’re not talking about it at the moment. But you never know. I’d love to see it on the Quest. I think we could do the same game, but art-wise, the visual fidelity of it would look very different. It’s been a fun game to work on. I like building games that have twists and turns and stories. Even today, explaining to the handlers who are playing the game–you’re not going to be playing the shield maiden all the time. Every saga you get to, you can play a new character, and then you can bring that character back to the existing world to unlock more content.

This is a full-sized game, a 30-40 hour experience. It’s not just something short that you play for a bit and put away. We want to bring the traditional 2D style of games that people love – something like Horizon, a big epic adventure game – to VR. I think there’s an appetite for that. I just haven’t seen many games delving into that. With Asgard’s Wrath I think we’ve hit the mark on that. 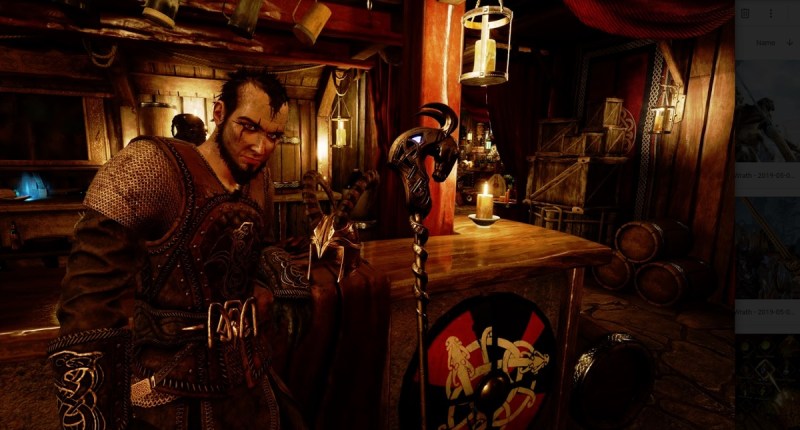 Above: Loki is your ally in Asgard’s Wrath.

GamesBeat: With God of War being so popular, do you think that’s a good sign for other games about Norse myth?

Kraemer: It’s a great thing. We’re huge God of War fans. We love Norse mythology. We pull a lot from that. We have different takes on those characters. People have preconceived notions of who Loki is, who Odin is, who Thor is, but we don’t necessarily follow suit. We change those characters a bit. Compared to the Loki you’ve read about, our Loki may be a little bit different. I think that’ll be fun for people, keeping it a bit more interesting.

GamesBeat: What’s your outlook on VR after working through multiple generations?

Kraemer: I love it. As a studio we’ve been in VR for a while. We started with VR Sports Challenge. We did Ripcoil, and then we did Marvel Powers United VR. Just seeing the evolution, seeing what can be done with it and where it can go, has been really exciting.

GamesBeat: How many people are working on the game?

Kraemer: On Asgard’s we have 90 or so on the team. It’s a big game. It’s long. The other thing to talk about is we have a lot of side-quests, little nuggets of gameplay. Those side-quests are full instances. It’s not like you’ll come back to the space, open a door that you couldn’t open before, find a treasure chest, and you’re done. We want to reward you for exploring. You’ll open that door and find a whole new world behind it with more questing to do.

We also have a lot of crafting. There’s a tavern you’re constantly going back to, checking in with Loki. You can get resources throughout your adventure, go back to the tavern, visit the blacksmith, level up some gear, make some new weapons, play some mini-games, and buy some stuff from the merchants. 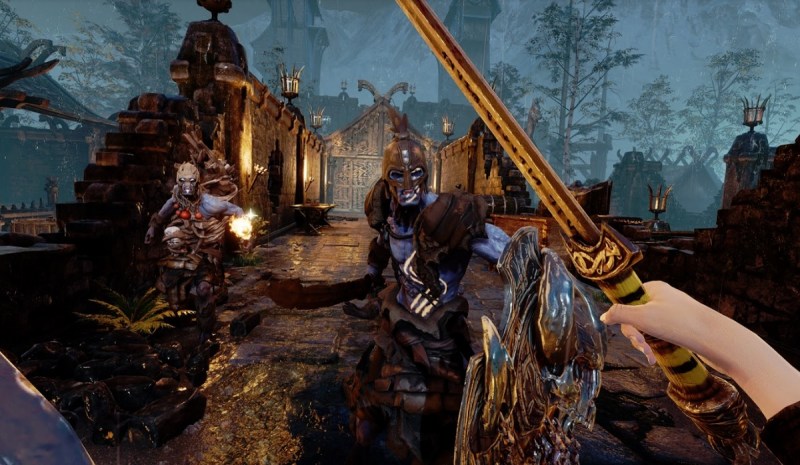 Above: Asgard’s Wrath has a lot of action.

GamesBeat: When you’re designing the game, how do you take into account things like—the sensors might be a bit off catching your movements. When you’re doing something, swinging the sword, it might not be expressed the way you want to.

Kraemer: There are lots of different tricks that we use for that. Sometimes we try to make the best assumptions. Your hand was here, so you were trying to do X action, and we assist you with the rest of the output of the motion or the attack or the contextual action you were doing. In Marvel, for example, we would know you were doing this move, so maybe–in third-person you don’t see the actual person, but it’s an animation that plays. Just so it looks better.

We do a lot of tricks like that across all of our games. We’ve gotten better at it. The nice thing is, we were one of the first studios to do full-body IK. We did that in Ripcoil. Every game we work on, we try to push that technology further. With Marvel we took it to the next level. We added the flying. Asgard’s Wrath takes that to a completely new level. What’s nice is, I see developers and I’ve had comments at E3 and GDC where people come up to us and say, “I love what you did with the full-body IK.” They’re looking at the game and trying to see how we did things. As a developer it doesn’t get better than your peers looking at your game and using it as a guideline for what they’re doing.

GamesBeat: What have you learned about making sure people don’t get sick? It’s the perennial problem in VR.

Kraemer: A lot of things. I’ve found, with Asgard’s Wrath—we have the black circle that comes in. We have a bunch of different motion options. But I’ve found that with this game in particular, most people are okay with it. They just play normally without it there. That could be partly because people are just becoming more adept in VR. They’re used to it. But we also have learned a couple tricks, behind-the-scenes stuff, to mitigate that and make it easier for people who are susceptible.