Daqri has begun shipping its augmented reality smart glasses for the workplace.

Los Angeles-based Daqri is betting that AR — a technology that overlays digital animations on top of the real world — will take off first in the enterprise, where customers are willing to pay a higher price in order to solve complex problems. The idea is to help people solve real-world problems, like fixing a jet engine or piecing together an assembly. Daqri argues that the gains in productivity and efficiency make up for the initial cost.

At $4,995, the system is not cheap, but it is optimized to present complex workloads and process a lot of data right on the glasses themselves. It is available for direct purchase from Daqri’s web site and through channel partners. Daqri is targeting customers across manufacturing, field services, maintenance and repair, inspections, construction, and others. 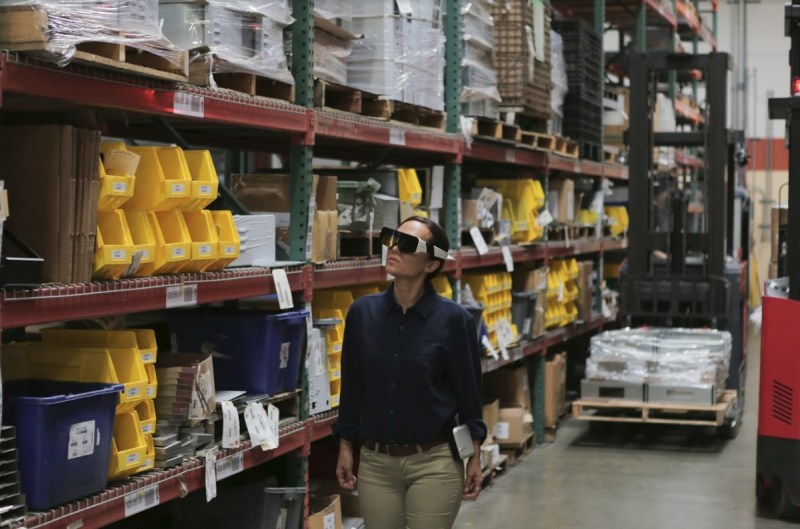 Above: Daqri overlays data on the real world.

Daqri has built a number of technologies from the ground up. The Daqri is powered by a Visual Operating System (VOS) and weighs 0.7 pounds. The glasses have a 44-degree field of view and use an Intel Core m7 processor running at 3.1 gigahertz. They run at 90 frames per second and have a resolution of 1360 x 768. They also connect via Bluetooth or Wi-Fi and have sensors such as a wide-angle tracking camera, a depth-sensing camera, and an HD color camera for taking photos and videos.

“Daqri has developed a comprehensive strategy to bring professional-grade AR to scale, including hardware, software, developer-friendly tools, and a robust partner ecosystem,” said Roy Ashok, CEO of Daqri, in a statement.

Daqri partnered with contract manufacturer Flex to build the device and is collaborating with Dell on supply chain applications. Daqri has also partnered with enterprise software offerings from Oracle, IBM, Autodesk, Siemens, Emerson, and others. Daqri competes with rivals such as Osterhout Design Group.

Besides the smart glasses, Daqri is also making smart heads-up display (HUD) technology, which is used in more than 150,000 vehicles.