Digi-Capital tracked startups raising over $6 billion across AR/VR/computer vision in 2018, driven by large, late-stage deals in China. A decline in deal volumes (number of deals) during the first three quarters of the year stabilized in Q4, while deal value (dollars invested) returned to a two-year average after large spikes from a few mega-deals (again in China). The next six months will determine whether or not this return to stability is a long-term trend.

There has been a gradual decline in overall AR/VR deal volumes in the last two years, with the most recent high well over 100 deals in Q4 2017. The stages which have seen the most variance are pre-seed and seed deals. Q4 2018 saw an uptick to approach 80 deals, although again pre-seed was somewhat limited. While accelerator deals (particularly HTC Vive X cohorts) skew deal volume data, even without them the overall stabilization in the fourth quarter holds true (although to a lesser extent). As expected, there are always far fewer later stage series B through series F deals. We will come back to these when we look at deal value.

The largest number of AR/VR deals by category in 2018 were in core tech, games, photo/video, solution/services, enterprise and smartglasses. However, there was a broad range of deals across 21 other AR/VR categories last year. Again, the next six months will determine which categories VC and corporate investors focus their attention on going forward. However, the general market narrative last year guided investors towards the crossover between computer vision and AR. There were also some VR investments (such as Varjo raising $31 million and Pico Interactive $24.7 million), despite media coverage to the contrary. 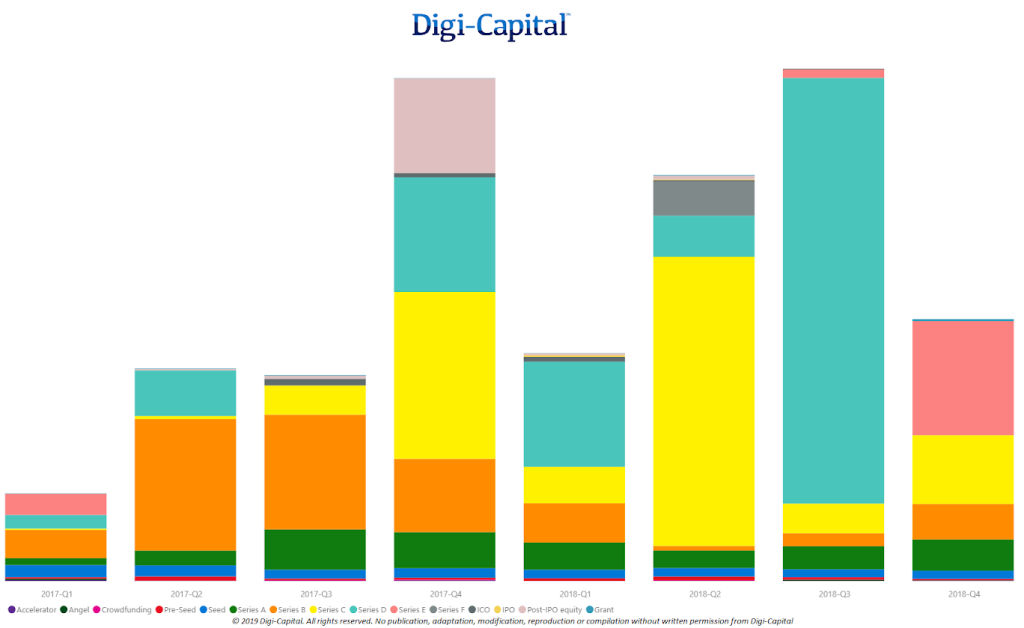 AR/VR deal value (dollars invested) has been lumpy over the last two years, with a few, massive later-stage series B through series F deals dominating VC and corporate investment into AR/VR startups (particularly in the record quarters of Q4 2017, Q2 2018 and Q3 2018 – some of which were over $2 billion total per quarter and all of which are outliers). This is not unusual, as later stage deals are typically much larger.

The scale of deals in the Chinese market has been particularly impressive over the last 12 months. There were individual series C deals over $600 million and one series D in the $1 billion range. Although over $1.1 billion was invested globally across all stages in Q4 2018, the bulk of that was again in later stage series C+ deals. Removing those outliers to focus on accelerator through series B, the market stabilized somewhat to over $300 million invested. 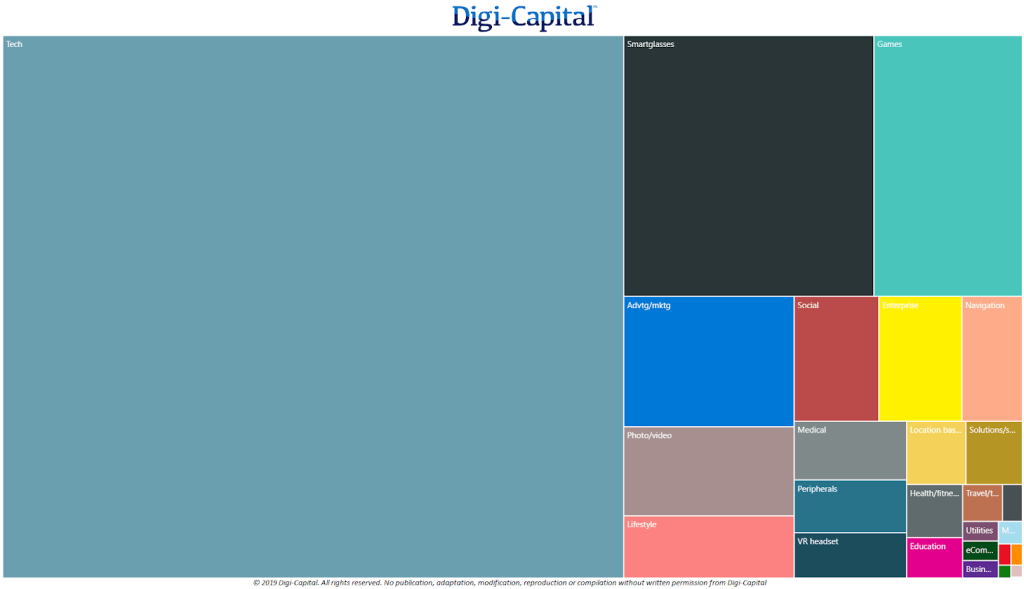 Above: AR/VR Investment Value (Dollars by Category in 2018)

By far the largest investment category by value (dollars invested) was core tech, particularly Chinese companies crossing over between computer vision and AR (so not AR pureplays). Even removing these crossover investments from the numbers, there was still significant investment with Chinese companies in AR advertising, lifestyle and smartglasses categories completing $100 million plus deals.

In the West, smartglasses company Magic Leap did the biggest deal with its $461 million round. Mobile AR game company Niantic also raised a large series C, some of which was revealed in December and which was finally announced as having topped out at $245 million with a nearly $4 billion valuation in January(note: the January portion is not included in the 2018 numbers). There were other deals ranging from hundreds of thousands to tens of millions of dollars across over 20 AR/VR categories last year.

The first three quarters of 2018 saw massive growth of investment in China, together with significant decline in the US. Q4 2018 returned to more normal historic levels of deal flow and dollars invested globally (including in the US), but the first two quarters of the year could set the tone for AR/VR investment to come. Watch this space.

Free charts do not include numbers, axes and data from subscriber version, with underlying data sourced directly from companies and reliable secondary sources. If you would like high resolution versions of the charts, please contact Digi-Capital.