Gamers Gift is a student-run nonprofit that believes in the power of virtual reality. It’s been around for about a year-and-a-half, and in that time, it’s raised over $50,000 and developed ongoing relationships with hospitals and assisted-living facilities, where it hosts monthly VR experiences. It’s raising funds on the livestreaming platform Twitch, where founder and CEO Dillon Hill and one other volunteer from the Gamers Gift staff will be playing games like the classic Minesweeper to Grand Theft Auto V.

Hill just finished his first year at University of California, Davis, and volunteer work and games have both been important to him for most of his life. The inspiration for Gamers Gift emerged out of his dissatisfaction with his community service experiences in middle and high school, as well as his personal experiences with games.

“It was just frustrating that the volunteer time I was spending — it felt kind of meaningless. Like, in a hospital we were just doing paperwork instead of actually helping patients,” said Hill in a phone call with GamesBeat. “The other inspiration would be the fact that, for a lot of my life, my family and friends and people I knew would put video games down as a waste of time, or just a useless hobby that doesn’t really do much for you.”

Hill recalls that when his best friend, Chris, was diagnosed with leukemia in fifth grade, playing games was their only respite. And again, when Chris’s sister took her life, it was a way for the two of them to connect and work together through an emotionally trying time.

“I was close to him, close to his sister, close to his entire family. It was really confusing for all of us,” said Hill. “We didn’t have a lot of opportunities — or really the ability — to talk about how we were feeling to each other, Chris and I. We played Counter-Strike and Mortal Kombat as a way to work together on something. It made us feel closer.”

Community is a big part of what Gamers Gift hopes to foster. It brings VR experiences to create social events at places like children’s hospitals or for people with disabilities, and it also hopes to give people a chance to experience or re-live something that they otherwise might not get a chance to.

“It’s interesting, especially with the assisted living facilities, because it’s next-gen technology being used by an older generation of people, trying to explain it to them, and getting them to try it,” said Hill. “Once they try it, they’re really excited. They realize, wow, this is really neat. It takes them back to a younger generation, when they were younger.” 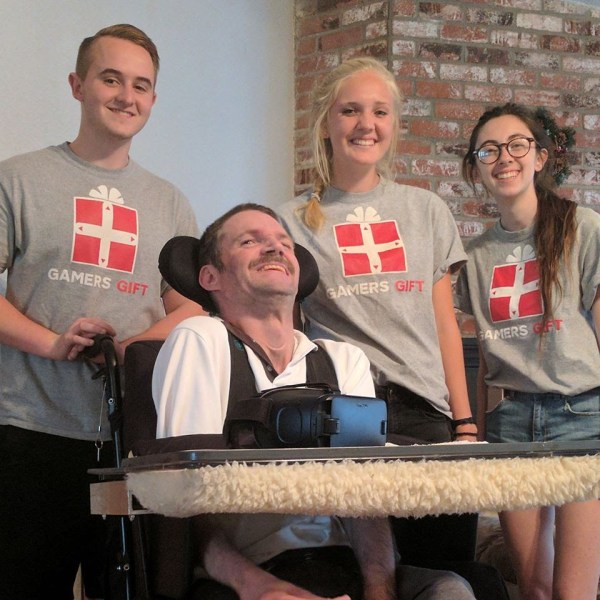 “We’ve introduced it to people who used to scuba dive all the time, elderly people who haven’t done it in years, and they say it’s exactly like the real thing,” said Hill. “It’s really immersive. There’s also a skiing experience — we had one woman who used to ski all the time who was interested in trying it, and we were able to find it for her.”

For the older audience, Hill says that they often use Google Street View to help them revisit their old neighborhoods. In one particular instance, they used a combination of Street View and roller coaster simulation software to recreate a woman’s first date with her husband on the anniversary of his death.

Gamers Gift has reached out to some developers to explore creating more bespoke VR experiences for their community, but it’s a tough proposition.

“We’ve had some issues there because either we go to an indie developer that’s a bit smaller – a lot of people are with VR – and it’s hard for them to get the manpower behind it in a reasonable time frame,” said Hill. “And then the larger studios are busy on huge projects and that makes it hard.”

Gamers Gift itself is a fairly bare-bones operation. Hill and five other volunteers staff the nonprofit, though none of them takes a salary. They also have about 20 other volunteers that help them go out to different facilities within a four-hour driving distance of their home base in Davis, California. In the future, Hill hopes that they’ll be able to open up chapters in other locations. The amount of work it takes is daunting, though; people have expressed interest in doing so, but are often unable to commit because of time and resources.

“We try to limit ourselves to four hours from where we are now. Beyond that, there are so many places that don’t get to experience it – so many kids in the hospital, so many elderly, so many people who could benefit from being able to experience these things,” said Hill. “We just can’t reach them, which is really frustrating.”

The goal of its Twitch marathon is to raise money to help with their local efforts. It springboarded off an inside joke between Hill and his friend.

“Chris and I used to have — now that I look back on it, it’s not very funny — but we had an inside joke where, when our parents or our friends would make fun of how much time we spent on video games, we would say, ‘Oh, well, at least we’re not sitting here mindlessly playing Minesweeper,’” said Hill with a laugh. “We mentioned that story — I guess it’s not really a joke at all — to our Twitch audience, and somehow that manifested into, ‘Well, we should do a marathon Minesweeper stream.’”

Fortunately for Hill — as well as Twitch viewers — Gamers Gift isn’t actually only streaming Minesweeper for 168 hours. So far, Hill has streamed titles like multiplayer first-person shooter Team Fortress 2, Grant Theft Auto V, and indie survival game Don’t Starve Together. The stream started with four hours on the clock, and each dollar donated will add another minute though it will max out at seven days. Currently, it’s raised a little over $300.

“We keep going as long as people were willing to keep donating, and all the donations that come in are going straight to Gamers Gift,” said Hill.

This post by Stephanie Chan originally appeared on VentureBeat.