Ghostbusters: Dimension Showcases the Magic of The Void, The World’s Most Immersive VR Setup

When I was seven years old, I distinctly remember walking into my mother’s room and asking if I could form a Ghostbusters club. “What would this club do?” she asked. “Oh,” I replied, a bit surprised that it wasn’t obvious. “Everyone picks a character [from the movies] and then, when we all get together, we’ll be those characters.”

My mother said yes and, just like that, the West Orchard Road Ghostbusters Club was formed. Unfortunately, 20+ phone calls of “recruitment” later, the club’s membership tally was only two. As such, I disbanded the club. But—as evidenced by my dressing up as Egon that Halloween—I don’t think I ever gave up that Ghostbuster dream. Instead, like so many wishes and wants that we come to believe are nothing but fiction, I just merely forgot about the ambition…until yesterday. When, twenty-five years later, that childhood dream actually came true thanks to The Void’s extraordinary and extraordinarily immersive Ghostbusters: Dimension experience.

Ghostbusters: Dimension, touted as “the world’s first ever hyper-reality experience,” opens to the public today at Madame Tussaud’s New York (located on 42nd street, between 7th and 8th). Clocking in at around 10 minutes long, the experience—set in a ghost-riddled Manhattan and powered by Unity—is exciting, exhilarating and excellently paced.

It begins in a small on-boarding area where you and two others (be it friends, family members or strangers) gear up with a backpack, headset and proton-pack shooter and prepare for an untethered experience. For a moment, the whole thing feels a lot like preparing for a game of laser-tag until a switch is flipped and suddenly—whoa, wait, what just happened?—the world around you is transformed into a hyper-realistic videogame world where ghosts will soon be lurking through Manhattan. And, importantly, you are not alone. You’ve transported with those two others; not as themselves, but dressed as locked-and-loaded Ghostbusters with whom you can communicate via headset.

For a semi-embarrassing moment, because your counterparts now resemble Ghostbusters, you momentary forget that these people are fellow humans. Until you accidentally bump elbows—oh yeah, you’re a person!—and soberingly remember that you are one too. But that last gasp of simple, experiential dichotomy (we are real, this world is virtual) is dashed over the next minute as a couple things happen that elevate this from a savvy, high-end virtual reality experience to, well, something else.

The first is the door. To begin the narrative experience, you (or one of your cohorts) must open a door. And of course—through your headset—what you see is a game-rendered door. But when your fingers touch the knob, you actually feel a knob. You feel metal. You feel an actual door. And that’s when you realize that you aren’t just moving through an open-world sandbox but rather through an environment in which you should expect moments of sand-like physicality.

That’s also the moment when I—having written about The Void a couple months back—remember that it was created by illusionists. And I start thinking about the three parts of a magic trick. There’s “The Pledge,” where the magician shows you something ordinary. And then there’s “The Turn,” where the magician makes that ordinary thing do something extraordinary. And then there’s…but I can’t remember the third thing because the Ghostbusters: Dimensions experience becomes too engrossing.

You find yourself in a room overflowing with cuddly-turned-cruel neon pink ghosts. And you must zap them with your proton pack (careful not to cross streams, of course). So ramble through the room—aiming and firing—and then that’s when the second thing happens, that other “something else.” Because inevitably, as these neon critters multiply, one of them is going to go through you. And when it does, your chest will tingle with haptic feedback. Wait, what just happened? Did a ghost just go through me?

And your answer comes as it happens again and that’s when you realize—in that beautiful, deeply internalized way that doesn’t even feel like realization—this is hyper-reality. This is the prestige. This is—whether you ever tried to start a Ghostbusters Club or not—the fulfillment of a long-held dream.

In deference to the magicians who cooked up this must-see experience, I won’t spoil any more about the experience. So instead I’ll end by returning to the ill-fated (albeit mother-approved) West Orchard Road Ghostbusters Club. Looking back, I had always thought that my desire to start this club was—as I had told my mom as a seven-year-old—because I wanted to be someone else. But after experiencing Ghostbusters: Dimension yesterday, I realize that was only partly it.

And perhaps a small part at that. Because, as a kid, I always had a strong imaginative spirit. Meaning that with or without the Ghostbusters Club, I was already spending hours as Egon, Slimer or Peter Venkman. So the idea of the club had to be about more than that. And as I thought about it further, I finally figured it out. It wasn’t just about being someone else; it was about someone else in a shared space with others. Because then—even if it might appear to the untrained eye as equally as imaginary—sharing an imaginative experience somehow makes it much more real. So I think the Void not only for helping me figure that out. But for giving me that experience I had forgotten about wanting so badly. 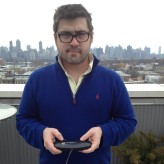