Hands-On With The Call of Duty XP Jackal VR Experience

This past weekend’s Call of Duty XP event in Los Angeles had a lot to offer fans, between hands-on opportunities with the latest iteration of the long-running franchise, Call of Duty: Infinite Warfare and the classic Call of Duty: Modern Warfare Remastered, Nuketown paintball, and Zombie laser tag.

However, fans could also choose to get virtual with the Jackal VR demo, held in a small, but cozy, container space located in the heart of the event. Over the course of the weekend, we had a chance to stop by and give it a try.

The Jackal VR experience was powered by Sony’s PlayStation VR set-up. The demo began with a quick briefing, involving someone fully dressed up like a pilot, giving players a “crash course” in how to control their space vehicle. In this way, it was reminiscent of an amusement park attraction. As you can judge from the featured image at the top, the whole demo takes place in the cockpit of a Jackal craft.

The demo itself took place in a small cabinet resembling that of a heads-up display in a real flight vehicle, and although we weren’t allowed to get a photograph of the cabinet itself, it was very close to the set-up of the Jackal in the actual game, complete with pilot’s chair and fake monitors. Once seated in the cabinet, an assistant helped us put on the PlayStation VR headset and headphones, then enabled us to take flight into deadly territory.

The Jackal VR experience started out smoothly enough, with your pilot firmly seated in the small but efficient vehicle and working their way through a loading bay while your captain, voiced by actress Michelle Rodriguez, gave pre-flight instructions. After a few moments of preparation, the vehicle finally shot its way into space, with a number of larger spacecraft looming in the distance.

The captain then instructed us to follow her through a series of gridded panels, in order to get used to the in-game controls. This part of the demo also shows us the broad scope of the flight space, showing some familiarity to other space flight simulators of this nature, including Elite: Dangerous or EVE: Valkyrie. The difference, of course, lies with the Call of Duty: Infinite Warfare engine, which helped drive the demo.

It felt similar to playing the game on a standard PlayStation 4, with the left analog stick handling acceleration and brake of the vehicle and the right analog stick changing the direction of the ship’s flight. Weapons were also available to obliterate enemies, with the right trigger utilizing machine gun fire and the left trigger enabling the usage of missiles, in conjunction with the PlayStation VR visor’s head-tracking for lock-on capabilities. In terms of gameplay, it felt similar to EVE: Valkyrie, which is available now on Rift, coming soon to Vive and PS VR.

After reaching a particular spaceship at the end of the run and analyzing it to see what kind of damage had been done, the demo then introduced the missile lock-on system, which works between holding down the left trigger and using the PlayStation VR headset to look around and lock on to targets. This took a little bit of adjustment at first, as the ship view holds perfectly still while a small red icon appears on-screen. However, players were able to reset this simply by tapping the touchpad on the DualShock 4 controller, should their aim become disoriented.

It’s here that the Jackal VR demo really begins to pick up speed, as we immediately began flying through the area and shooting down as many enemy ships as possible. The lock-on system proved to be highly effective for quickly taking down up to three foes in one shot – with a trio of missiles available at a time – but only if you were within close proximity.

At other times, the guns prove to be more effective, with a small target indicating where to fire in order to effectively hit enemies. This enabled us to really rack up the kill count on enemy vehicles, provided, again, they were within a certain range of the guns.

Even though the Jackal VR demo didn’t feel like a typical Call of Duty experience, Activision, alongside the development team at Infinity Ward, did an outstanding job of capturing the thrill of space flight, while at the same time creating a combat scenario that made superb use of the virtual space. It really felt as if you were swooping through space, hunting down enemy vehicles and blasting them out of the universe with ease.

Things did get a little chaotic during the demo with the chatter, as your captain and other pilots called out their targets and tried to maintain the integrity of larger vehicles that were under attack. However, that really tied in with the rest of the experience rather well, making us feel frantic attempting to keep things together in the heat of combat.

Of course, the demo eventually had to come to an end, but did so in just the right way. A large enemy vessel suddenly makes its way into the arena, and before we could even blink, it began firing massive lasers at one of the larger crafts, obliterating it within a matter of seconds. Your captain orders everyone to attack it and smaller ships with extreme prejudice, but by this point, it began to target your ship, and the demo came to a close with a large, blinding flash of light. Luckily, it wasn’t intense enough to disorient you from the experience, mind you.

To conclude the demo, players were given a total “kill count” of how many ships were taken down (we ended up around 24 – not bad, an attendant told us) and given a Jackal VR patch to take home. It was a great deal of fun, but too short for its own good. Given the nature of the event and the thousands in attendance, however, this enabled more than enough people to get a turn with it.

Activision said it is planning to release the VR mode as bonus DLC content when you purchase the game on PlayStation 4. Call of Duty: Infinite Warfare arrives on November 4th.

Considering that a lot of developers for the system are creating unique experiences that tie in with popular games – like WB’s Batman Arkham VR and EA’s exclusive Star Wars: Battlefront VR Mission – the Jackal VR demo would certainly fit right in.

Robert Workman is a freelance writer covering video games and other electronics with work featured in AOL, Gamecrate, and Opshead. You can follow him on Twitter:@TheDCD. 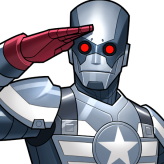