If you’ve played any number of survival horror games, there’s a good chance you’ve explored a fair share of abandoned subway stations. You’ve also probably found yourself standing in the occasional ankle-deep blood pool, and have undoubtedly crossed paths with more creepy characters than you care to recall.

In Here They Lie, a psychological horror game developed in collaboration by Tangentlemen and Sony Santa Monica launching exclusively for PlayStation 4 and PS VR this fall, you’ll once again be treated to all these genre tropes. Thanks to clever mechanics, pulse-quickening production values, and the immersion-ratcheting power of virtual reality, however, these familiar frights will feel as fresh as the first time they sent chills down your spine.

Before donning the headset and headphones for my demo, developer Tangentlemen’s art director Richard Smith describes the game as a “surreal, hallucinatory horror experience.” Uninterested in monster-in-closet moments, jump scares, or the sort of cheap frights that teen slasher flicks rely so heavily on, Here They Lie, according to Smith, aims to “create a world for the player to explore that contains the qualities of the real world, but fractured.”

Sure enough, my demo begins in a dimly lit, dilapidated subway. Unsettling for sure, but not necessarily unfamiliar…until, of course, the shadow of an antlered creature scurries before me. From a first-person perspective, I push my character forward with the left stick, while turning my head to illuminate the way with my flashlight. The latter feature is especially intuitive, as the beam naturally follows my movements, allowing me to illuminate points of interest and things that go bump in the night.

I quickly forget about the shadow I’m following, as a fresh threat—a masked figure peering from around a corner—now has my full attention. The character soon vanishes, but another appears behind me. At least that’s what the looming shadow and heavy breathing over my shoulder would suggest. I pivot to find nothing, but discover the game’s quick-turn feature. A smart alternative to whipping around in a potentially nausea-inducing fashion, the mechanic triggers a cinematic quarter-turn in any direction.

More specifically, it sees the player flicking the right stick, before witnessing a brief fade-to-black effect, then facing in the desired direction.

Free of my masked pursuer for the moment, I begin trailing a strange, wind-like sound emanating from the subway’s depths. Here They Lie sets the tension-amping tone with its effectively moody, muted art direction, but it’s the highly atmospheric audio—from creaking doors to ominous foot falls —that never let you forget you’re in this world.

Approaching the sound with equal amounts of dread and anticipation, I discover a gaping chasm that makes Silent Hill‘s voids look like modest sinkholes. Staring into the cavernous space reveals another masked figure perched on a ledge and, more unsettling, a hammerhead shark that seems to be swimming through the air. I  quickly retreat in the opposite direction, but the game’s deliberate walking pace ensures I never feel entirely safe from a possible subway-shark attack.

No sooner do I catch my breath than I find myself descending a stairway into a river of blood. As my footsteps slosh through the red plasma below me and light-bulbs startlingly pop above, I spy a starry abyss in the distance. As dreamy as it is disturbing, the sparkling vista provides no passage forward. I turn around, but the stairs have been replaced by a wall; to my right is a painting featuring a silhouette that slowly grows in size, while my left leads to a door that somehow extends beyond my grasp every time I step toward it.

My demo concludes with the painting’s figure emerging from the canvas. Carrying a briefcase and sporting a sharp suit, he appears to be a nice enough chap, save for the fact he’s engulfed in flames and staring at me with glowing eyes.

While my time with Here They Lie was tailored to showcase some very specific elements, Smith ensures there’s much more to the nightmare-conjuring experience. On top of collectibles, such as story-shaping documents and audio logs, it will feature player-driven moral choices and an overarching meta-narrative. Speaking like someone who has way too much fun trying to scare the pants off players, Smith says these various elements will culminate in a “final decision that’s really going to hit home.”

We look forward to going down that rabbit hole further when Here They Lie arrives like a case of the night sweats this fall on PS4 and PS VR.

Matt is a freelance writer with work appearing in publications such as TechRadar, IGN, Digital Trends, and more. You can follow him on Twitter: @gamegoat. 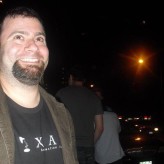