Haptx Unveils Haptic Gloves So You Can Feel Things In VR

Haptx has been working on its haptic gloves — which give you a sense of touch in virtual reality — for a few years. Today, the company is launching its Haptx Gloves Development Kit, an industrial-grade product for advanced simulation in virtual reality.

While the gloves have obvious applications in VR games, most of the interest so far is coming from industrial and enterprise markets. I used the gloves in a demo with the HTC Vive last week.

In the demo, I wore an HTC Vive headset and put on two gloves that were connected by thick wires to a big computer. The gloves were somewhat heavy on my hands, but they were lighter than they appeared to be, given their size. (I had to put sanitary finger gloves on each hand first.) Then I went into a demo featuring a barn and a farm landscape. I could touch the grains of wheat and feel how each rubbed against my fingers. I touched the clouds and felt rain droplets hit my open hand.

It was creepy when a spider crawled across my hand and I felt it. But it was cute when a fox and sheep did the same thing. Each time I touched something, I felt touch feedback through the gloves. It was surreal. (It was my second time wearing the gloves, as the first time I tried it with only one. This time, the feeling was more fine-grained in terms of sensations.) 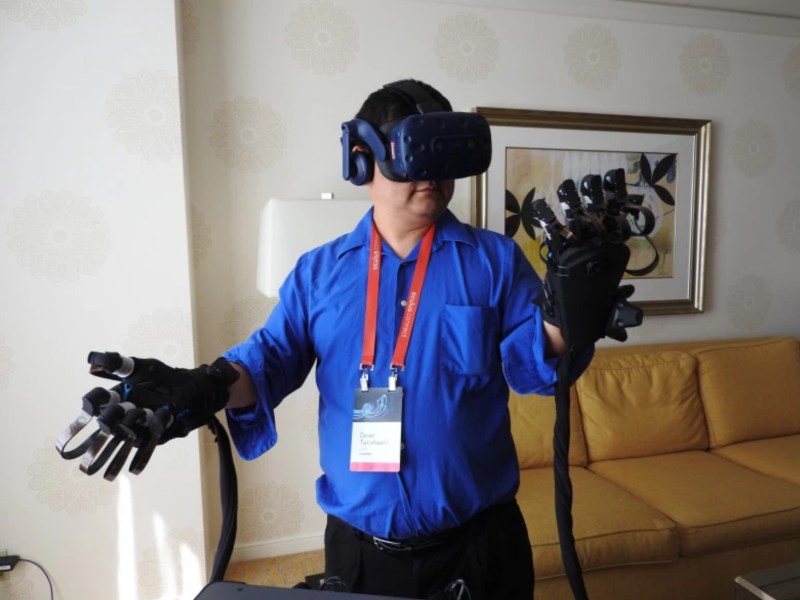 Above: Dean Takahashi looks at a spider on his hand, in VR.

“With Haptx Gloves, leading automotive and aerospace companies can touch and interact with their vehicles before they are built, radically reducing time and cost for design iterations,” said Haptx founder and CEO Jake Rubin, in an interview with GamesBeat. “Industrial and government organizations can deploy virtual training solutions that build real muscle memory, providing a safe, cost-effective, and flexible alternative to live training.”

The kit includes two gloves, each featuring 130 tactile actuators, or little pressure-sensitive motors, that provide realistic touch feedback across the hand and fingertips.

They are built with Haptx’s patented microfluidic technology, which pumps fluid through wires to provide the feedback. Haptx Gloves can deliver powerful force feedback and motion tracking with sub-millimeter precision. 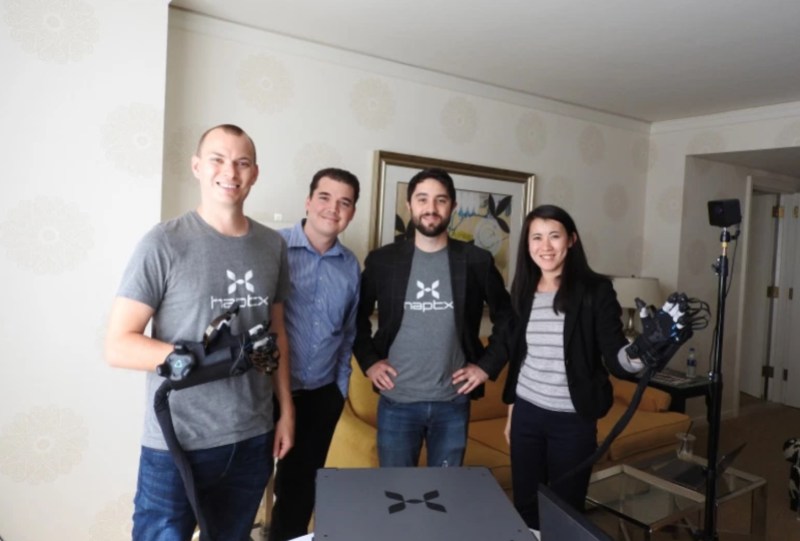 “The Haptx Gloves Development Kit provides a new level of haptic fidelity and realism,” said Mary Hamilton, managing director and lead of the Digital Experiences R&D group at Accenture Labs, in a statement. “Accenture is looking forward to seeing how Haptx Gloves will enhance the capabilities of VR for human-machine interaction.”

“Realistic touch is the missing link for truly immersive VR training simulations. Haptx Gloves are the VR device we’ve seen to bridge this gap,” said Peter Morrison, co-CEO of Bohemia Interactive Simulations Group, in a statement. “Bohemia is excited to see how Haptx Gloves will enhance the capabilities of VR for training and simulation.”

“Enterprise customers need far more precision and realism than today’s VR controllers can deliver,” said Joe Michaels, chief revenue officer at Haptx, in a statement. “Realistic touch is the missing link for many enterprise VR applications. Haptx Gloves are the first device to bridge this gap.”

The HaptX Gloves Development Kit makes its worldwide debut October 3, 2018 at the Future of Storytelling Summit in New York City and the GeekWire Summit in Seattle.

Haptx has 35 employees, with offices in Seattle and San Luis Obispo, California.