Virtual reality can never be too immersive, at least until we get to something like the Star Trek Holodeck. While VR’s visuals and sound make you feel like you’re wandering in a 3D space, the feeling disappears the second you touch something. That’s why Haptx is the latest company to try to tackle this problem — with haptic gloves that enable you to feel things that you touch in VR.

VR has been slow in taking off with consumers, and it just might take another generation or two of the technology before it lives up to its potential. Haptic technology, which could really bring the force feedback and sensation of touch, might be necessary in the next generation of VR systems.

Jake Rubin, CEO of Seattle-based Haptx, showed me his company’s haptic gloves at the recent VRX event in San Francisco. I could feel the texture, size, weight, and impact of objects in a virtual environment. It enables tactile feedback, force feedback, and motion tracking. 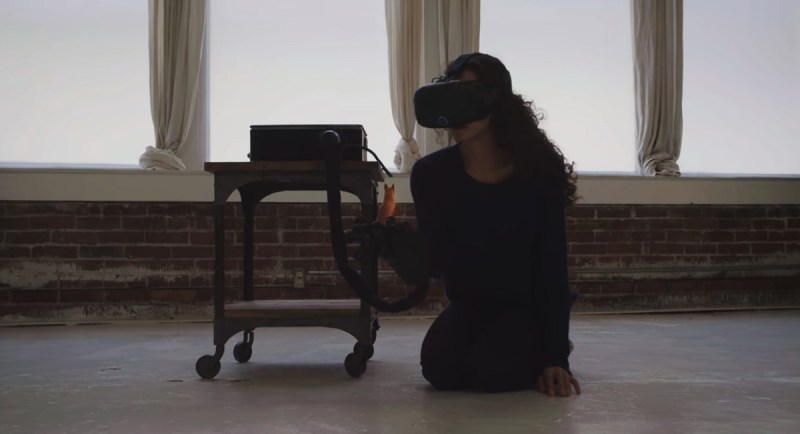 Above: Haptx lets you feel a fox walking across your hand.

Rubin said the company’s Haptx Skin is a microfluidic smart textile that delivers high fidelity tactile feedback. The gloves have more than 100 points where air bubbles can be inflated to displace your skin and make you feel something as you move your hand through the virtual world. Haptx combines this with motion-tracking technology to figure out where your hand is in a 3D space and the kind of feedback it should send to your hand.

“We have proprietary algorithms that simulate interaction with any virtual object,” Rubin said. “There are no electronic motors in the glove. It is microfluidics.”

The demo showed me a farm in VR. I could run my fingers through strands of grain in a field and feel them on my skin. I could touch the clouds in the sky, and the stars as well, and each felt different, due to different resistive forces. A fox jumped into my hand as I held it open. That was a lot more fun than feeling the eight legs of a spider walking across my hand.

I asked if the spider would bite me.

“We found that was a little much for people,” Rubin said.

Raindrops fell on my hand, and as the drops bounced on my hand, I could feel them. I was giggling while it was happening. For the finale, a bunch of UFOs invaded the farm and I had to knock them out of the way. Each time I hit one, I could feel its force on my hand.

I used the demo with an HTC Vive VR headset that was connected by wire to a big box. That box controls the flow of air into the glove, which also had a custom sensor attached to it. The glove has panels in the palm and fingers, allowing you to feel the shape texture of objects. There’s a force feedback exoskeleton in the fingers with microfluidic actuators that apply resistance to your fingers as you grab things. 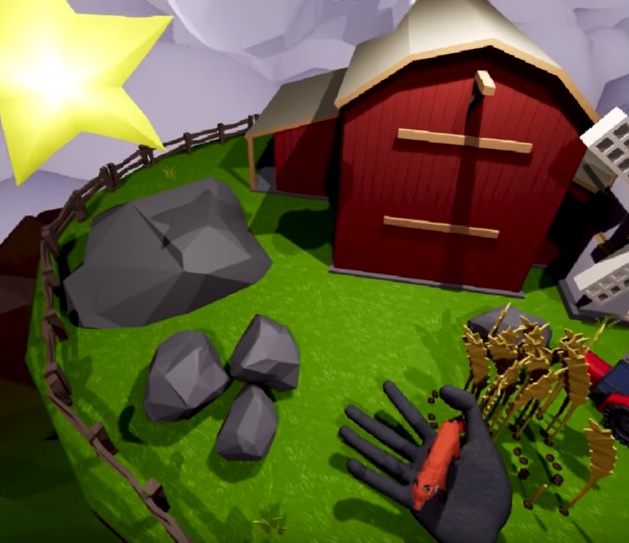 Above: You can feel the rocks and the wheat in this demo with a Haptx Skin glove.

The glove is still a prototype, and it’s pretty bulky. But it sure beats a rumble game controller, which is used in video game systems today but isn’t very useful in enterprise applications. And it’s a proof of concept demonstrating that the tech can fit in a glove.

“Haptics today are limited to vibrations, which buzz when you touch something,” Rubin said. “It doesn’t tell you anything about the size, shape, and texture. We believe microfluidics can displace your skin in the same way that happens in real life. It is augmented with force feedback to provide resistance.”

Right now, the system can only handle one glove, but soon it will handle two. The company hopes to ship Haptx gloves to its first 20 customers in the middle of 2018. After that, it will scale up full production.

“We’re already talking to top studios, intellectual property creators, theme parks, and arcades,” Rubin said. “Those will be some of our first customers. Initially, we’re focused on location-based entertainment.”

The initial applications will be arcades and theme parks. Beyond gaming, the company is looking at markets in entertainment, design, manufacturing, and training.

Rubin started the company in 2012 with cofounder Bob Crockett, who heads the biomedical department at Cal Polytechnic State University in San Luis Obispo, California. Rivals include Dexta Robotics, Tactai, and Ultrahaptics. Years ago, Jaron Lanier’s data gloves were tracking systems only, and they tracked only one kind of motion.

The company has more than 30 people. It previously operated under the name AxonVR.