Madefire has been committed to making “motion comics,” or digital versions of comic books that leap off the page with animated visuals. Now, the company is announcing that it is showing off its first Motion Book experiences on Magic Leap‘s augmented reality glasses.

The Madefire platform isn’t a mere app that runs on the Magic Leap One Creator Edition, the development version of Florida-based Magic Leap’s AR glasses that sells for $2,300. Rather, Madefire and Magic Leap are collaborating to try to establish a new medium.

This kind of mixture of technology and entertainment doesn’t come around every day. I’ve tried out Magic Leap’s headset. It may not be very practical yet, but it has executed well on a vision of enabling magical experiences in the new medium of augmented reality. Games like Dr. Grordbort’s Invaders look great on Magic Leap, but now Madefire is bringing something entirely different.

Founded in 2011, Madefire has made a lot of progress with its Motion Book platform, with partnerships with both DC Comics and Marvel in digital comics. Madefire’s platform is available on iOS, Android, and in virtual reality on the Oculus Rift. Among the 40,000 comics available, the Madefire platform has Blizzard’s Overwatch video game comics. 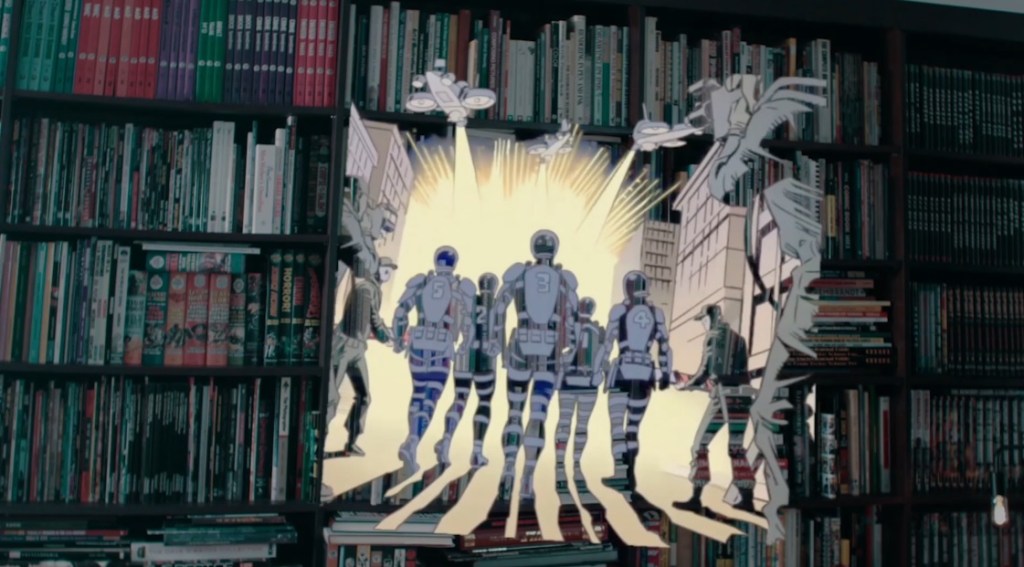 Above: This is what motion books look like on Magic Leap.

For Magic Leap, it’s just one more application. But Dan Lehrich, senior production director at Magic Leap, said it is the kind of experience that you can’t get anywhere else. The idea started six years ago when Rony Abovitz, CEO of Magic Leap, who spoke with Madefire cofounder Liam Sharp at the San Diego Comic-Con event. At the time, Madefire was launching on mobile devices, pushing comics into the 21st century.

“Rony came over and said, ‘What could you do if you could publish into space,’” said Ben Wolstenholme, CEO of Madefire, in an interview with VentureBeat. “We said, ‘Are you crazy?’”

Lehrich joined Magic Leap two years ago at a time when the technological experiments were becoming real, and it was now time to make the projects into something tangible. Lehrich helped push the collaboration forward because he felt it was a new way of telling stories.

“This is the kind of thing that Rony really cares about,” Lehrich said. “What made this stand out was this ability to bring another form of content creation to the device.” 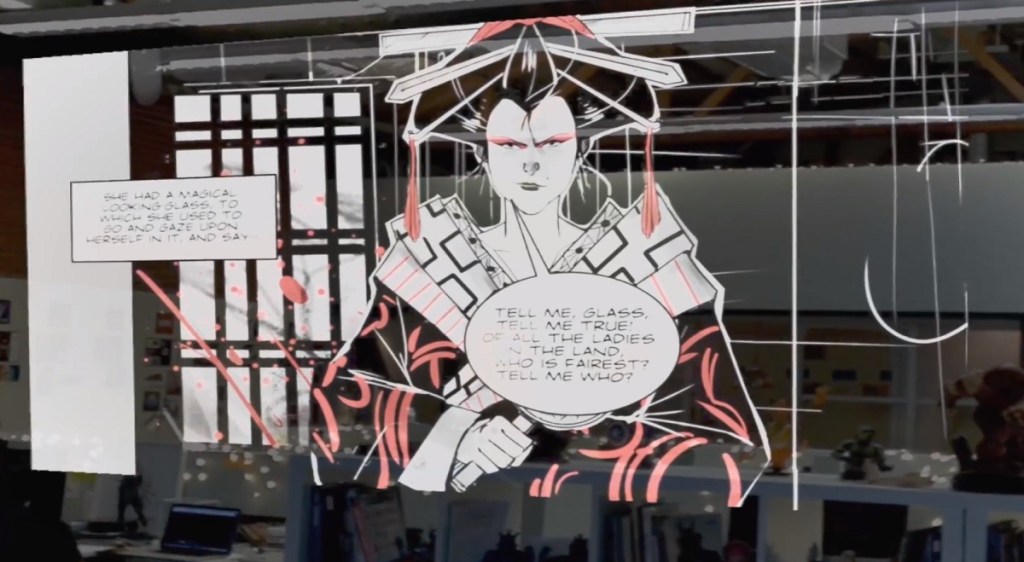 Above: Madefire comic layered on reality.

Before Magic Leap, Lehrich worked on projects like the iPad version of Disney Infinity, the toy-game hybrid that saw success for a couple of years before Disney pulled the plug on it. He felt there was a natural connection between Madefire and Magic Leap because they could empower different kinds of creators.

But there was no easy way to take content from something like digital comics to augmented reality. So Madefire made tools that enabled AR authoring. It takes existing assets for digital comics and brings depth to them, allowing artists to create 3D objects that can then be placed in a physical space. Artists can preview changes in near real time. They can add spatial sounds easily, and visualize the comic in X, Y, and Z dimensions in the form of layers. No engineers are necessary to use the tool. 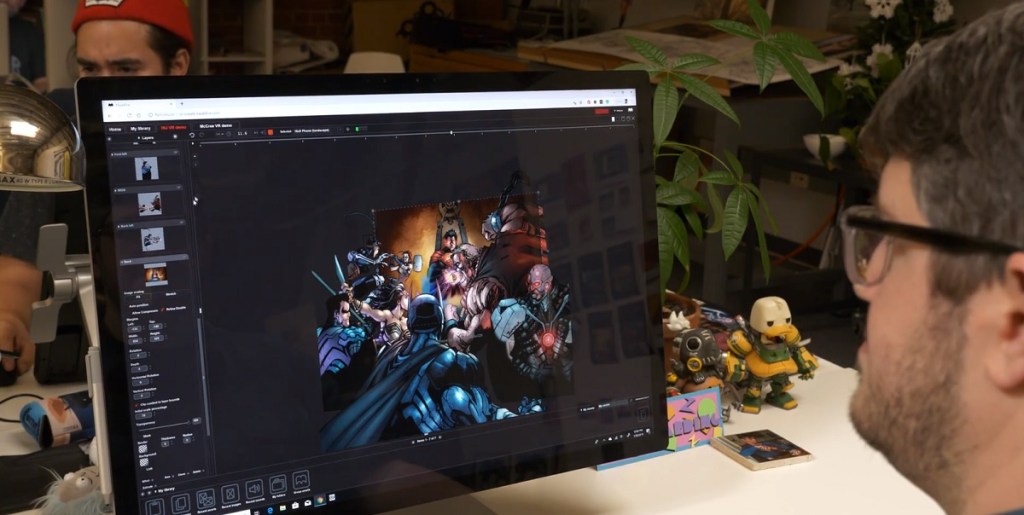 Above: Making AR comics is easier with Madefire’s new tools.

Magic Leap partnered with Madefire to take the existing tool and enhance it for AR artistry. But it’s not meant for artists to create true 3D art, which is more the domain of video game tools like Unreal and Unity. Rather, this is about taking 2D art and putting it into a 3D world, Wolstenholme said.

“We’re a platform for creators, and Magic Leap is the ultimate destination to publish and create,” said Wolstenholme, speaking at his company’s Emeryville, California headquarters. “It’s the culmination of many years of work. This allows a level of expression and a level of story that is unprecedented.”

Wolstenholme said that his team has always been fascinated by storytelling and idea of taking the frames of comics and depicting them in a digital way. Motion Books can make a still image appear as if it were moving, adding motion and sound to words and pictures. And the Magic Leap experience can make those images pop out of the screen into the real world, as if they were three-dimensional, with motion, sound and depth, and a sense of where that image exists in physical space. 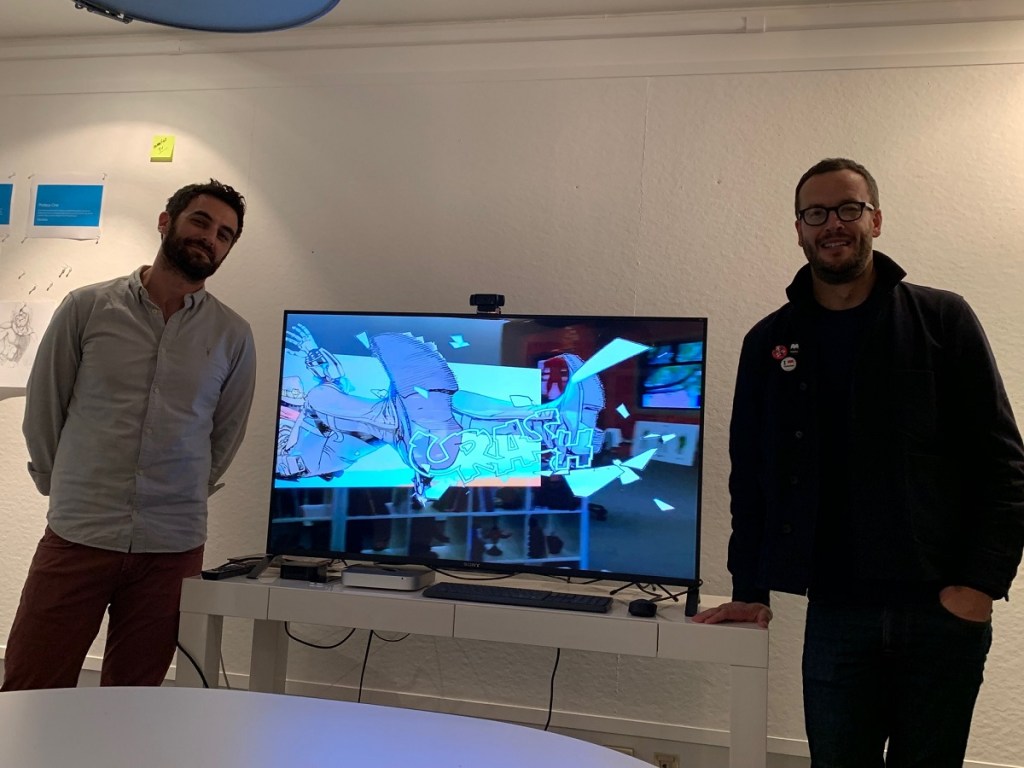 Above: Dan Lehrich (left) of Magic Leap and Ben W of Madefire.

“We see Magic Leap as the expression of this,” Wolstenholme said. “Now you can walk in among the comics and through them. We are relearning how to tell stories because we are thinking spatially instead of only on black rectangles.”

I tried it out, and it was a very cool experience.

“If you look over there, you should see it,” said Lehrich. I turned around and looked at one of the walls at Madefire’s headquarters. I saw a character from Overwatch popping out of the wall, with the image integrated into the real world. 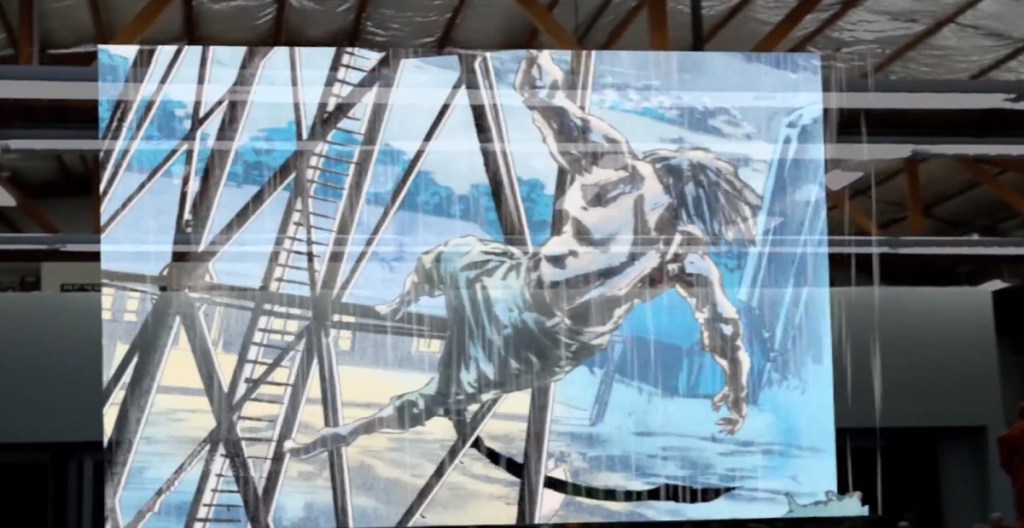 Above: Madefire enables publishing of digital comics into augmented reality.

I thought it was beautiful, and I could move around an image and see it in a kind of 2.5D experience. The colors were slightly washed out, but generally good. One limiting factor was the limited field of view of the Magic Leap device, which means that you have to turn your head from side to side to see some of the larger images. About 20 Motion Books are fully optimized for Magic Leap now, with a couple of hundred more that will work with it. You can get a sense of depth and parallax effects by moving around and flipping the digital pages.

Using the Magic Leap controller, I could actually grab the digital comic book and move it around the room. Some of the images came with load times. But Lehrich said they were optimizing the loads. I didn’t think Madefire needed to put the word “loading” into the screen, as it was kind of distracting.

Madefire is backed by Toni Schneider (former CEO of WordPress) at True Ventures, as well as Bill Woodward (former chairman and co-founder Macromedia) with angel investors including Sina Tamaddon, Apple executive. Magic Leap has raised more than $2 billion from a variety of big tech companies and investors.