The Sacramento Kings NBA basketball team has launched an augmented reality app in partnership with Nike.

The fan app is the beginning of an eight-year global marketing and merchandise agreement between Nike and the National Basketball Association (NBA). The app lets fans personalize Sacramento Kings uniforms and virtually photograph themselves with star players. It’s another example of a company using a cool technology to give younger fans a better experience with an established brand.

With the Kings + Golden 1 Center app, the team’s new uniform comes to life through an AR platform built by Zappar, which has struck similar deals with brands like Coca-Cola. Fans will be able to interact with Kings veteran Garrett Temple, who wears the new uniforms for the first time and talks about the team’s on-court look.

Fans can customize their own jersey, virtually “frame” and “hang” the new look on their wall, and photograph themselves with Temple. 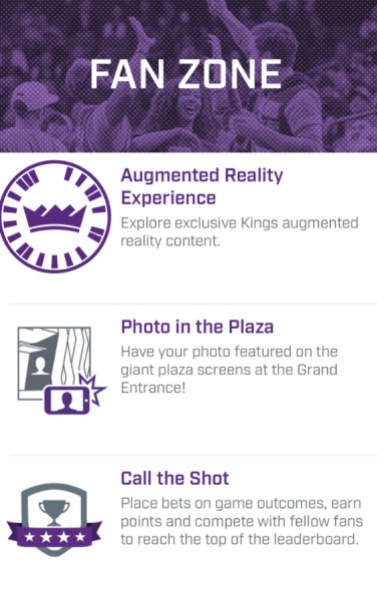 Above: You can use a mobile phone to access the Sacramento Kings AR app.

“Through technology, we’re able to put the latest in uniform design right in the hands of basketball fans around the world with an unprecedented amount of information and detail,” said Kings chief technology officer Ryan Montoya, in a statement. “The partnership between Nike and the NBA is rooted in creativity and transformative design, and with our augmented reality experience, we’re building on that long-standing tradition.”

The new Nike purple “icon” uniforms and white “association” uniforms will be available for fans to buy this fall, which means the AR experience is the only way fans can experience the jersey and embedded technology until the beginning of the 2017-2018 season.

The Sacramento Kings have embraced digital tech for a while. They say they were the first team to join Twitter, invest in a virtual reality company, host a Reddit “Ask Me Anything” with players, use Facebook Live to interview players, stream a game in VR internationally, and host a startup competition. The Kings created a new sports venue in downtown Sacramento using solar energy, where they also added broadband connectivity and debuted the NBA’s largest video board with 4K UltraHD resolution.