In case you don’t have enough things to do in virtual reality, you can now run 2D-screen Android applications within virtual reality on the Samsung Gear VR, thanks to a new version of Samsung’s PhoneCast app.

The app works on the Samsung Gear VR headset, which uses your mobile phone to give you a VR experience. The PhoneCast app’s Labs enables you to run games and other apps in VR, including livestreaming apps that let you stream videos to the giant virtual screen in VR. It creates a 2D window within your VR environment. Within that window, you can run Android apps.

If you don’t mind doing a little bit of work in order to get new experiences, this might be your kind of thing. You can get it in the Oculus Store in the usual way, downloading and executing an app, and the docking the phone into the Gear VR.

You can use applications that have been approved, or whitelisted, for the app, and you’ll see them in the VR menu while wearing the Gear VR headset. If you have already downloaded those apps, you can proceed. But if you haven’t, you have to download them in the Google Play store first.

Previously, the only approved apps are video streaming services. But a new version of PhoneCast coming out on September 15 will let you run other apps. A Labs section of the PhoneCast app will contain a number of apps that might work. 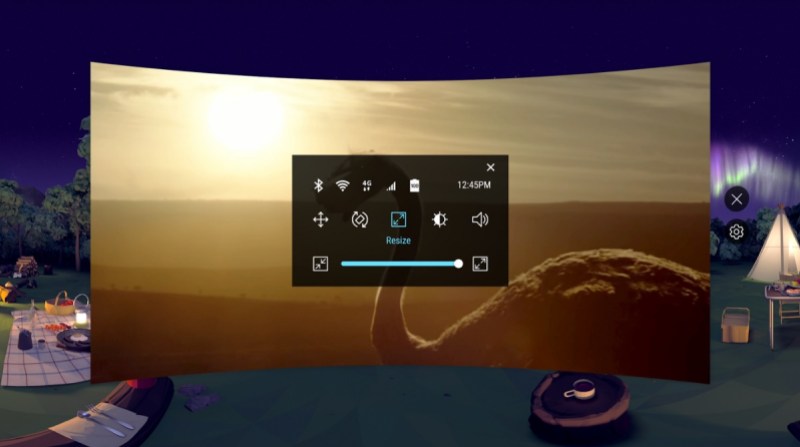 Above: Samsung’s PhoneCast VR has a beefed up user interface.

Christopher Peri, a tech director at Samsung, said he tried out Fallout Shelter. It didn’t work at first, but it worked fine on the second attempt. Monument Valley also took a few tries but it eventually worked as well, Peri said.

Jung said in an email that the team studied Gear VR user data and found that retention was an issue. That can be addressed with more VR content, but it can also be addressed another way. So the team started bringing a more abundant resource — 2D screen applications — into the VR space.

“This was where we started our creative solution,” Jung said.

After the video apps launched, Samsung got more feedback that users wanted more apps. So the team launched the Labs section.