First-person shooters may have transformed the gaming medium but it hasn’t truly been “first-person” in the strictest sense of the word. That’s not the fault of the gaming industry. The technology required to put the player in a protagonist’s very own butt kicking boots hasn’t been at that level until relatively recently. So now that VR is on a path to become as accessible of a household item as the toaster oven and the microwave, it’s time that someone make a Doom-like game where you can do more than just control an unidentified warrior’s line of sight with a joystick or a set of keyboard keys.

As it turns out, Bethesda Softworks and id Software have delivered something better than a Doom-like; they made an actual new Doom game for the HTC Vive and PSVR platforms. They also offered fans the chance to try out a short demo during the 2017 QuakeCon gathering in Grapevine, Texas located near the original headquarters of Doom’s legendary creator and it felt like the perfect place for my 90s teenage self to come out and play.

The 2016 reboot of the gory FPS that launched an endless line of flattering imitators and the final answer to the lingering question, “When are we gonna get Doom 4?” delivered a fresh take on the classic Hell-runner by focusing less on scares and more on shots and ‘splosions. Doom VFR (if you have to ask what the “F” stands for, then you’re not a true Doom fan) does the same thing very well with some small but noticeable limitations due to the current precautions of its medium.

Doom VFR puts you in the same detailed universe as the 2016 version. The demo featured two levels including the befuddled UAC facility that’s been taken over by the unholy souls of Satan’s minions and the jagged rock landscape of the ninth level of Hell. You’re given a small array of the silent soldier’s arsenal of fire-spitting firearms like the pistol, the shotgun and (my personal favorite) the pulse rifle that you wield and fire with the right motion controller. My demo was on the HTC Vive, so I played using the Vive wands. The weapons themselves are just a tad bit smaller than their console and PC counterpoints but it still feels fun to be able to hold them in your hand and point them in a demon’s face while you pull the trigger at point blank range.

The left controller moves your characters through the level with two different methods. You can either move a very short distance with the touchpad or transport your entire body down hallways or from cliff to cliff by a distance of several noticeable feet through point and click teleportation. This may have been the best way that the game’s designers could have replicated the movement scheme from the traditional FPS experience but it can feel a little cumbersome and almost like you’ve entered a cheat code to help you escape from the firing line of Satan’s Hell-spawn.

The other fun addition to the Doom universe in the 2016 release was the wonderfully dubbed “glory kill,” a rewarding, hands-on way of killing your enemy for bonus armor and health when you desperately need it. The 2016 game felt like it had thousands of different ways to disarm, disembowel, and dismember with your gloved hands. Doom VFR offers the same feature but on a much smaller scale referred to as “telefragging.” As soon as you see your wavering enemy’s outline flashing, you simply transport yourself over to them and they turn into a blood fountain. It’s not as satisfying as ripping a head off like with the traditional glory kill, but man is it still a fun kill bonus feature for what could have been another endless, mindless shooting experience.

Luckily, the rest of the experience is just as satisfying as its console and PC counterpart. Spraying a wave of bullets or lasers across your field of vision feels responsive and exhilarating. You’ll feel a great rush from seeing Satan’s minions or something bigger like a Cacodemon or a Mancubus run right at you and get in your face as opposed to just running up to a screen between the both of you. If unloading a chain of bullets into Pinky’s face using every muscle in your arm doesn’t put a smile on your face, then you’re trying too hard to avoid feelings of happiness.

And just imagine how it feel to do the same thing with a chainsaw.

DOOM VFR is slated for release on HTC Vive and PSVR this holiday season on December 1st, 2017. You can read additional impressions about DOOM VFR from E3 right here and here. We’ve also got updated thoughts on both Fallout 4 VR and Skyrim VR from QuakeCon as well, and a detailed interview with Pete Hines, Bethesda’s VP of Marketing.

Let us know what you think of the game so far down in the comments below! 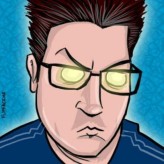