A quaint carnival-style haunted house sits on a nostalgic map, surrounded by warm autumn décor reminiscent of a local fair. Overhead hangs a large moon with the occasional roll of thunder in the sky. Nothing feels too spooky, instead giving off an amiable vibe to visitors.

One would not expect anything too intense to happen here.

As our tour group proceeds into the first hallway, we encounter friendly skeletons that pop out of wooden barrels with cutesy springy sounds. Further inward, we stumble upon whimsically posed furniture for photo opportunities, a line of spiders dancing along the dimmed hallways.

This is fun, I think politely, reminding myself that this house appears to be for all ages. Rec Room’s junior members would find it entertaining, although there might be a yawn or two as children stroll along.

But the turn into the next area begins a descent into something else. Just as our sense of safety is lulled we are introduced to the grand plot twist. This haunted house is not completely without a darker storyline.

The Rec Room staff fooled us.

Rec Room’s all-new House of Terror attraction is the combined effort of the social platform’s building team and The Haunt Society, a real-life association dedicated to helping Halloween-hungry revelers find the closest and spookiest haunted houses in their area.

Approached by Rec Room for the collaboration, Haunt Society co-founders and filmmakers Zack Andrews and Bobbe Roe sought to create an experience that offered something beyond what real-life haunted houses might be able to provide.

“That’s what’s really nice about the idea of expanding a haunted house within Rec Room,” Roe told UploadVR. “The sky’s the limit. We tried to figure out different things you could do that you’re not able to do in real life.”

Nicholas Butera is credited as creating one of the first horror maps in Rec Room in 2018. Nowadays, he serves as a Publishing Build Team Lead for the social VR platform. Working with a lineup of four creatives, including a prolific sound designer, Butera helped in House of Terror’s construction over the course of five weeks.

“One of the best things about working with The Haunt Society was getting their experience of going to all these haunted houses,” he said of the collaboration. “There are so many amazing ideas they had.”

The fusion of vision and effort lead to the first-ever virtual haunted house sanctioned by the real-life society. Also assisting in construction was Rec Room’s brand-new tool for map publishing, Rec Room Studio. Rec Room Studio is an upcoming feature for users to create and publish maps through Unity, rather than drawing out everything through the platform’s classic pen-and-ink system. Interested users can sign up at recroom.com/studio to try out the new program, which is currently in beta.

House Of Terror — Just The Right Amount Of Scary?

And what is the rest of the haunted house like? Atmospheric, dark, and clever. There’s a creative use of lighting to draw out apprehension to proceed down unlit hallways, as well as excellent sound design, planted in the right spots, to urge users to continue their journey. Some points bring up uncertainty and tension as inhuman creations close in on the user’s space. Because of the just-tense-enough immersive nature of the haunted house, the minimum visitor age for the experience is set to 13.

Strong points of House of Terror are its complete story and the inclination to bring a friend. The haunted house can be traversed alone, but some moments will elicit a laugh and make visitors want to share that laugh with others. The creative decoration also serves as great spots for group pictures. Players are going to have fun getting lost in the hallways and running from monsters.

What’s best about House of Terror, however, is its refusal to talk down to its audience. It strikes a balance as being friendly enough for younger players to engage with, but not so intense that it would be inappropriate for preteens to experience. Halloween is a holiday celebrated the world over, and adequately spooky entertainment that strikes the right notes are great for kids who
appreciate the genre.

“I have an 8 and 5 year old, and we always talk about, what is a gateway horror that is appropriate?” Roe mentions in a discussion about approaching horror experiences without making younger audiences feel unintelligent. “I have a list of horror movies I want to show [my children] at different ages.”

House of Terror is an immersive experience that runs for a minimum of 15 minutes, and can be accessed by visiting Rec Room’s new “Haunt Society” room. Horror fans can also check out The Haunt Society’s film event, The Houses October Built, on October 28th at 3pm PT by visiting https://rec.net/play/movienight. 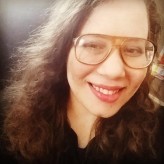 K. Guillory is an illustrator and immersive journalist who writes about virtual design and gaming trends.