After deciding he wanted to do more with his life than Candy Crush Saga, Tommy Palm cofounded Resolution Games in 2015. He started the company to make virtual reality games for mobile virtual reality, starting with the fishing game Bait!.

VR platforms kept morphing under his feet, but Palm has expanded his reach to augmented reality and still kept a focus on VR. Resolution Games has raised a lot of capital, grown to multiple teams with a total of 58 people, and published a lot of games. So far, the company has created Acron: Attack of the Squirrels!, Angry Birds VR: Isle of Pigs, Bait!, Wonderglade, Narrows, Angry Birds for the Magic Leap One, and others.

VR hasn’t taken off as fast as anyone had hoped, but Palm’s belief in it is unwavering, thanks to the strong engagement of the wireless VR headset Oculus Quest.

I caught up with Palm at the Oculus Connect 6 event in San Jose, California, where he showed off Acron: Attack of the Squirrels, which uses both a VR headset and smartphones in the same game.

Acron: Attack of the Squirrels

Tommy Palm: We’re releasing Acron: Attack of the Squirrels. One person is in VR as a tree and trying to defend their acorns against a bunch of angry squirrels, played by mobile players. It’s a great way to get a multiplayer experience together where not everyone has to have a headset. If you have a Quest, you can bring your friends over and show it to them. It’s a great way of introducing people to VR.

GamesBeat: It’s a kind of crossplay.

Palm: Yeah. It’s a great way–you start understanding the game on your mobile phone, which is a very familiar device. Once you go into VR, there’s not too much you need to learn. You already know the rules of the game.

GamesBeat: Does everybody wind up taking a turn, then?

Palm: Yeah, exactly. It can also be played online, but it’s best enjoyed in groups of friends. It’s perfect for the Quest. You can throw it in a bag and take it to your friends’ house like you would a board game. Anyone can get into it quickly and start playing and having fun. We have a short trailer that shows off the concept very nicely.

We did a lot of work around character design. We’ve been getting much better at that as a studio. There are four squirrel characters, each with different abilities. One of the squirrels can dig tunnels. Another one can build bridges. You have to collaborate. “Go build a tunnel over there so we can get next to the tree!” There are also little props with gameplay mechanics, like planting a mushroom and using it to jump over things. Each level — there are six of them — has its own components, where you have to cross a river or move around other features.

I’ve always loved games where people can communicate. Games are so good at creating a topic to talk about. 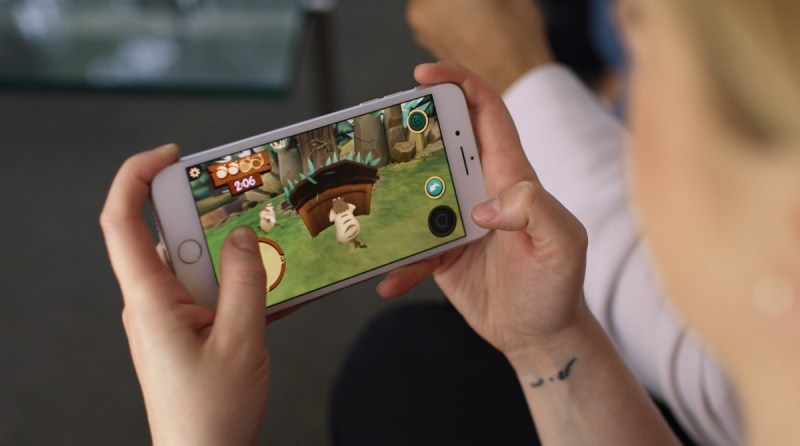 Above: Acron: Attack of the Squirrels marries VR and mobile.

GamesBeat: How long did you work on this? Where did the idea come from at the start?

Palm: It’s been about a year and a half. We wanted to do an asymmetric game, where it’s a different game when you’re playing in VR compared to playing on mobile. We tried another direction first, and then some of the guys came up with this much simpler game. It turned out really well.

GamesBeat: Are mobile players just using the touchscreen for controls?

Palm: Yeah, you have a virtual joystick for one hand and buttons for throwing acorns and things like that. In VR, as the tree, you have different objects that appear in front of you, like a boulder, chunks of wood, or sap balls. The boulders roll around the field of play. You’re trying to smash them as they come at you. You can pick the squirrels up and throw them in the water, or throw them way back to the beginning of the level

GamesBeat: If you were, say, a PC player on a 2D screen doing this, would it be any different from the VR side?

Palm: The VR player has hands. You’re really good at throwing. It becomes physical. My favorite thing is when you have one hand throwing like this all the time, and then the other hand throws things more slowly. People seem to have reacted very positively. You really are the evil boss of the game. Being able to have hands that can grab things is very intuitive.

The timed nature of the levels, too–when we were doing public demos at PAX, people were realizing that there’s a huge contrast between the player in VR and the players on mobile. When it gets down to the wire, where there’s just one more acorn to grab and one squirrel left and you’re in sudden death mode, with no one else to help, the last player is scrambling around trying not to get nailed and people are just, “AAAH!” We had crowds of people cheering. It was really intense, really cool.

Above: Resolution Games’ Acron: Attack of the Squirrels.

GamesBeat: What platforms is it out on now as far as the VR part?

Palm: It’s on Steam, Quest, Rift, Vive. It’s not on PSVR yet. That would be pretty good. [Laughs]

GamesBeat: How difficult is it to do it on all the platforms right now?

Palm: In this case it was actually a very hard technical challenge, because of the mobile game. You have such a variety of Android phones. There’s a lot of testing to do there, especially with the online component. The testing phase was pretty daunting for the team. I’m very glad we didn’t take on PSVR at the same time. The last three months or so were spent on making ourselves feel more secure about certain bugs and other things we ironed out.

GamesBeat: How many more levels do you have for Angry Birds now?

GamesBeat: How is that going, generally?

Palm: It’s going very well. It seems to be something that people really enjoy. They’re coming back to it and talking about in positive terms. We’ll continue working on that title. It’s been going much better with the Quest launch. Both of our games, that’s the device that dominates downloads right now. As they were saying today, retention is very high. People are coming back to the platform to keep playing, which is great.

The outlook for VR

GamesBeat: Looking forward, did any of these announcements today look interesting to you on the platform side?

Palm: I was blown away that you’ll be able to use USB-C to play from your PC. That’s fantastic. I saw that as a rumor at first, but I never connected the dots. I didn’t think that could be possible. That’s fun, that they were able to keep that secret and just announce it. “But wait, this is what you’ve got for your Quest as well!” It’s such a great device already. I love my Quest. It’s everything we were hoping for. The only big thing now is eye tracking and foveated rendering. That’s something I think is going to be very good for developers and consumers.

GamesBeat: Are you able to stay entirely focused on VR at this point? Are you doing more AR?

Palm: We do a little bit of AR as well. AR and VR are very tightly connected. But VR is by far the majority of our production right now. We’ve grown to 58 people in the office now. We’re quite a large studio as far as VR is concerned. We’re working on seven projects in parallel. We have a lot of things going on.

GamesBeat: A lot of smaller projects, then? Shorter experiences?

Palm: Not necessarily. Like we did here with Acron, we have teams working for longer amounts of time. This team was pretty small, only six people. That’s been a very successful method of working for us. We owe a lot to Unity. It’s a great game engine. Everyone can collaborate on the same project.

GamesBeat: Do you still hope to see the platforms accelerating?

Palm: The retention we’re seeing from Quest is a good testament to that. It used to be about the hardware not being good enough, but now the ball is in the court of the software developers. We need to come up with games and applications that people really benefit from, things that are worth going back to. They talked about that a lot today. Productivity could be a very strong area. We see that creating things in VR is really great. Some of our 3D modelers use VR for their modeling. It goes very fast.

GamesBeat: What are some things you still want to see done in VR?

Palm: Personally, I’m very excited about multiplayer games, where you do things together with other people. That’s been a theme that we’ve been talking about here a little bit.

Our intention with Acron was for it to be a local party game, but the way it was created, you can do matchmaking with anyone around the world. We’ve been seeing people on Reddit and Discord announce, “Hey, anyone want to play right now?” People are randomly pulling together and playing games. It works perfectly with the announcement today about events.

GamesBeat: What price did you come out at for Acron?

Palm: It’s $19.99. I think the best price point for consumers is still zero. [Laughs] But in this case we have things like server-side costs as well, for hosting. It’s not a super high price, but it’s not zero either.

GamesBeat: HTC has their subscription side going. It’s a different kind of model.

Palm: Angry Birds is a part of that, yeah, the Infinity subscription. 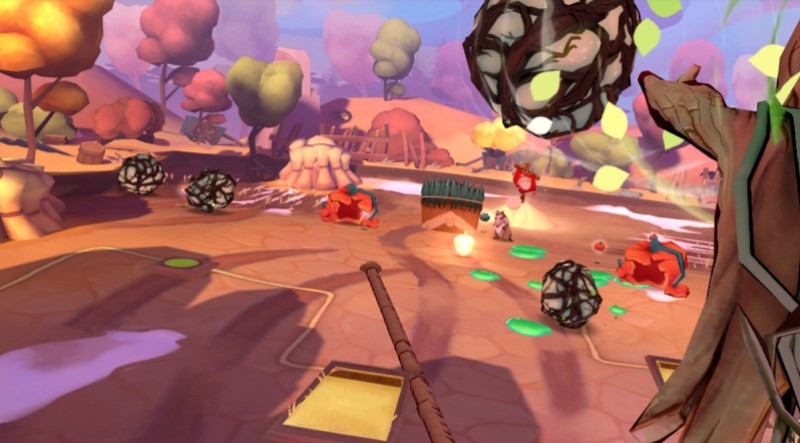 Palm: It’s very exciting, being able to do things together with other players. Especially today when so few of your friends likely have headsets. The chances of being online in VR with one of your friends is very small. It’s great to have something built to go where you can find somebody to play with.

My background comes from online games. That’s what I was always interested in doing. There was definitely a peak for PC games where people talked a lot about persistent worlds, but that’s been in a slump for a little bit. I definitely think that’s going to make a comeback in new forms.

GamesBeat: Are there any other big things coming for you guys that you can talk about?

Palm: Not yet? We’re going to be teasing some new games soon, three new titles. Or two new games and a new addition to a current game. We’ll have one out this year and then two out in Q1 of next year. We’re planning to do a significant upgrade to Angry Birds, with a level editor. You can build levels any way you want and play against them in VR. We’re still working on getting a little teaser trailer together for that.

Again, with the hands–you’re building with blocks. It’s intuitive. Anyone can do it. It’s very satisfying to create things in VR. You get into a really nice flow. I don’t know if you remember the Toybox demo that Oculus used to show the hands in the beginning, but I loved that. With an IP like that, you can actually construct things yourself. It’s tangible. You can play with it. You’re moving the blocks around, the birds, the pigs. If you want a level that’s all TNT boxes you can do that. [Laughs]