This post is from the “Beyond The Headset” interview series. Featured image by Pascal Perich.

“Our mission is to be the best platform for 3D creators to publish and share 3D content on the internet, and for the rest of the world to discover it.”

Thats how founder and CEO of Sketchfab Alban Denoyel sums up their mission. Sketchfab was founded in France and has since become one of the premier names in 3D hosting and modeling.

Apart from being a 3D model evangelist — making it available to all — Alban is quite the savvy founder. We discuss the future of 3D modeling, how Sketchfab sees VR developing, and some of the strategy he used to bring his startup to success.

Since you founded Sketchfab in 2012, there has been a very big shift in 3D modeling and graphics regarding the emergence of VR. How has your mission changed over time?

AD: Initially when we started, there was no community and no content. So Sketchfab was “just” a sharing tool.

As the tool was good, it began to be used by a lot of different verticals. Then we started building the social layer into the tool. And now it’s not only a tool but it’s also the largest community of 3D creators and the largest library of 3D files on the internet.

The two big things that have changed is how we can create and consume 3D.

Now with solutions like 3D capture, photogrammetry, and depth sensors, anyone can create a 3D file. We are big believers that everybody is becoming a 3D creator and that our phones will have 3D cameras, that we’ll start taking 3D photos of our holidays, our kids and our things. In addition to 3D capture, there are creation tools like Tilt Brush or Minecraft which mean that we have five-year-old kids uploading things on Sketchfab now.

The other big shift is how we can consume 3D content, and that’s with VR and AR. Before VR, Sketchfab content was only consumed with a mouse and keyboard on a 2D screen. It is already great, but it is a sort of work around.

VR/AR is the “native” way to consume 3D content, the way it is meant to be consumed which is six degrees of freedom, and navigating just like you would navigate in the real world. So it makes what we do and our content much more relevant and important than when we started.

Do you see Google Project Tango as a big part of the company’s future?

AD: Yes, definitely, not only Tango but all phones with dual cameras; every phone manufacturer is working on those. Google Tango is one of the leaders and the first to have shipped a product on the market, along with Intel Realsense. Apple is going to release something around that — Windows just released a phone with native 3D capture.

When you think about it, it’s just the natural evolution of how we capture the world. We started with paintings, then we got photography, then we got video. We kept getting closer to what the world actually looks like. The world is in 3D so we are going to capture it in 3D as well.

“Mars One” Mission – Base
by admone
on Sketchfab

How are you different from other hosting services? What makes you better or different?

AD: To be honest, there are rather few hosting services dedicated to 3D. One of the main differences is that we want to be an horizontal platform. A lot of hosting services are focusing on one vertical only: real-estate, engineers, architecture, 3D printing. We are pretty much the only horizontal platform accepting all the formats, and letting you embed them anywhere on the web.

One of the other major differences is that we are integrated with pretty much all the creation tools. We are native in Photoshop or Blender, and integrated with more than 50 tools, which makes us the easiest way for any creator using one of those tools to share his creation on the internet.

And we have done the same thing with the publishing platforms. We are supported natively on Facebook and Twitter. We are the only way to embed 3D there, and in more than 70 other publishing platforms — and so that’s what make us pretty different from any other service.

Our viewer technology itself is probably the most advanced. We support physically based rendering, real time lighting and shadows, more than 30 formats, from point clouds to volumetric video. We support everything you would expect when you are using an advanced tool like 3DS Max or Unity.

Last but not least, thanks to our WebVR support, everything published on Sketchfab is view-able in VR with any headset, directly from a Sketchfab URL or a Sketchfab embed. Nothing to install, no compatibility issues, no app store to go to. On top our our basic VR support, we released a VR scene editor, making Sketchfab the easiest way for 3D creators to publish their work in VR.

A lot of creators are looking to buy complete environments where they can just drag and drop in order to quickly and cheaply create VR experiences. Do you see asset purchasing being part of the Sketchfab process in the future?

AD: For now we have stayed away from the asset store concept, and we have partnered with most of the asset stores. We are integrated with the Unity asset store for example. And so someone who wants to sell assets there is going to list it at the Unity store and is going to upload it on Sketchfab, and this way can embed a 3D preview in the store, and also generate leads from Sketchfab. People will discover the work on Sketchfab and then if they want to buy assets, they can go to the Unity Asset store. It’s a bit like on Soundcloud: some tracks are available for sale through itunes. We don’t exclude moving in that direction in the future.

I think there is possibly a bigger opportunity around monetizing the viewing of the content. Almost like what other music services started doing like Spotify or Soundcloud. Once they reached a critical mass, they switched part of their content to premium and so all the free content is free to browse, and ad supported. And the premium content is ad free and you needed to be a paying member to browse it. And so I see an opportunity around that, where most of our content would be free to browse and possibly ad supported while some of it would be longer form like — higher resolution, like a private collection from the a museum and you would have to be a paying member to be able to browse it.

What has your experience been like with investors, with the series of funding? Founding the company, explaining to investors, what was that like?

AD: It depends on the stage of the company, each round is different. We started in France, we were first time Entrepreneurs and we were very early with a very frontier technology. We did not have a specific business model and so it was pretty hard back then to pitch the concept and explain why it would matter.

The great thing about France is that when you leave your job, when you are unemployed, you are able to keep receiving your salary for almost two years. As a subsidy from the government and that’s how a lot of entrepreneurs bootstrap their company. And so when we started Sketchfab, we bootstrapped for one year out of that money.

Another company started at about the same time as us. They were out of Stanford or MIT or something like that. They raised two million in Silicon Valley, and they spent that money building lots of features and hiring lots of people.

At the end of the year, we had spent no money at all, and we grew 10x faster than they did. Because our product was much simpler with much less features because we had no money to build 10,000 features.

Star Wars – Deliverance of Binks
by JCulley3D
on Sketchfab

I know you have learned a lot of lessons in all the years that you have been growing and building. What are some core lessons that you think other people could use?

AD: I think one of the core lessons is to do less things but do them better. When you just start you have a tendency to try and do everything you can and — to do every user requests and I think you should focus on only one thing but do it very well. And instead of doing 10 or 100 mediocre things you should just really focus on this one thing.

We have always focused on displaying a 3D file as well and as fast as we could in a browser, so we always said no to features like 3D printing, marketplace… And we became very good at that because we were only doing that.

So you need to figure out scalable ways to distribute your product and have people discover it. For us it was to get integrated into creations tools. Getting in blender or Photoshop means those tools are going to tell their users about Sketchfab which means they are doing the work of distributing our product to their users, which is much more efficient than us trying to do that.

Where do we see Sketchfab going in the future?

AD: We see a future where everybody is becoming a 3D creator and a 3D consumer. We started in a very B2B world of professional 3D designers, and it was very niche.

We see a future where Sketchfab can be a consumer platform just like YouTube or Soundcloud, where a lot of people share their 3D captures or 3D creations. On Sketchfab you will find the long tail of content made by normal people and then we will also host the high level and high value content coming from movie studios, consumer brands and game studios. YouTube started as a service for individuals and then brands realized that it was an awesome marketing vehicle for them.

We see a future where, when Tesla releases a new car, they will tease it on YouTube as usual, and will also release a virtual version of it on Sketchfab. Every brand will have a channel to unveil what they are working on.

It will be a platform where both individuals and companies meet to share and experience virtual things.

This post by Hayim Pinson originally appeared on Medium as part of the “Beyond The Headset” interview series. 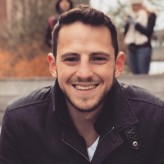