Virtual reality and augmented reality represent areas of opportunity. VR failed to live up to the wildest promises when the new systems launched in 2015. But the number of job postings for VR and AR have risen 93 percent since 2015, with 17 percent of that growth happening in the past year. Those jobs are dispersed across the U.S. but job site Indeed.com noted that five cities have the most VR and AR job listings.

In order, they are New York, Los Angeles, Seattle, San Jose, and Atlanta. The top three cities are all home to major gaming companies, with New York City housing Rockstar Games, while Los Angeles as a region is home to companies such as Activision, Blizzard Entertainment, and Naughty Dog. Seattle is home to Microsoft, Nintendo of America, and Popcap Games. (GamesBeat Summit 2018will feature a fireside chat with game entrepreneur James Hursthouse on where the game jobs are.)

Indeed.com said that esports is generating a lot of buzz, with a lot of gamers hoping they can make a career in esports. Indeed.com reported that job postings related to esports are up 18 percent since last year and up 57 percent since 2015. Indeed.com is a major job seekers site, and it analyzed its data for patterns in the game industry, which is prone to ups and downs. The report is a follow-up to data it released on the game industry in early 2017. 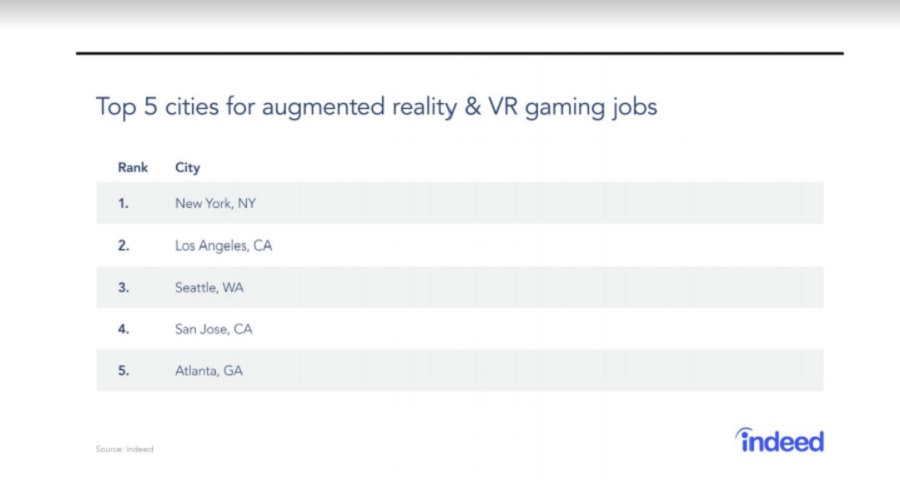 The top five cities for AR and VR jobs in the U.S.”There’s no doubt that behind the glamour and excitement, gaming is a serious business subject to ups and downs like any other major industry,” Indeed.com said in its report. “New technologies bring disruption and new roles; some jobs rise as others decline.”

Games generated an estimated $36 billion in revenues in the U.S. in 2017, according to the trade group Entertainment Software Association. Overall, games have become a $116 billion industry worldwide, according to market researcher Newzoo.

But Indeed.com said declines did happen in some of the general categories related to games. Game tester and quality assurance roles are down 36 percent since last year and down 43 percent since 2015. 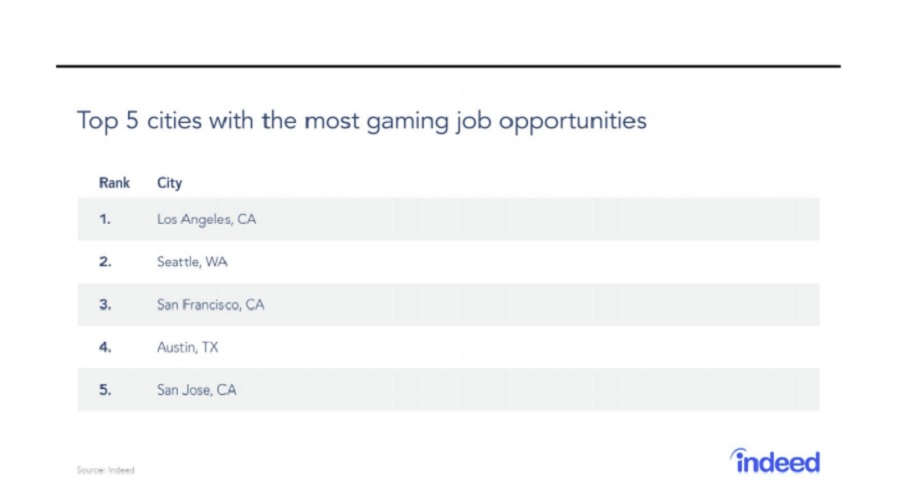 Despite that drop, game developer and engineer roles still make up a large portion of gaming job postings.

New York City may be strong on VR and AR, but it’s less of a hub when it comes to gaming jobs overall. Los Angeles leads, followed by Seattle while San Francisco and Austin take the number three and number four spots. (This ranking should be viewed with some context, as San Francisco was ranked as having about twice as many jobs as Los Angeles in 2017).

In other words, employers and job seekers are generally aligned on what’s hot. However, one notable group of positions is experiencing growth in job searches and a decline in job postings, potentially indicating a high level of competition for these roles. Game developers and engineers have had a steady rise in job searches totaling 40 percent since 2015, even as job postings have fallen by 9 percent in that same time period.

Some roles have seen a drop in job seeker interest. The number of searches for game designers has fallen 8 percent since 2015 and searches for game testers and QA jobs are down by 15 percent in the same time period.

Indeed.com said it will continue to monitor game jobs throughout 2018. A separate survey by Limelight found more than a third of gamers surveyed said they would quit their jobs and become a professional gamers if they could support themselves by doing so.

This article by Dean Takahashi was originally published on VentureBeat.