VRPhysio Enables Patients To Do Physical Therapy In Virtual Reality

Eran Orr needed physical therapy, but he found out the hard way that it wasn’t easy to do. Physical therapy is always a big part of rehabilitation, but no one wants to do the exercises. It’s hard to book an appointment with a good therapist. And it’s hard to know what is really working.

So Orr founded VRPhysio, a Tel Aviv, Israel-based company that enables patients to do physical therapy in VR. VR Physio is one of about 90 augmented reality and VR companies in Israel. The company was one of a handful of Israeli companies that presented at an event hosted by Orange Fab Accelerator and the government of Israel’s economic mission in San Francisco.

The company has created a clinical solution that is registered as a measurement device with the Food and Drug Administration. The PC-based VR platform can be used to help patients deal with such ailments as whiplash from car accidents. In a demo, Orr showed how you can — while wearing a VR headset — look upward at some barrels. You fill the barrels with water, exercising your neck. On average, whiplash victims have to go to 30 physical therapy sessions, Orr said.

“We take the physical therapy protocols and put them in VR, measure them, and give you feedback,” he said. “We can see the points in the exercise where the patient hits the pain points.” 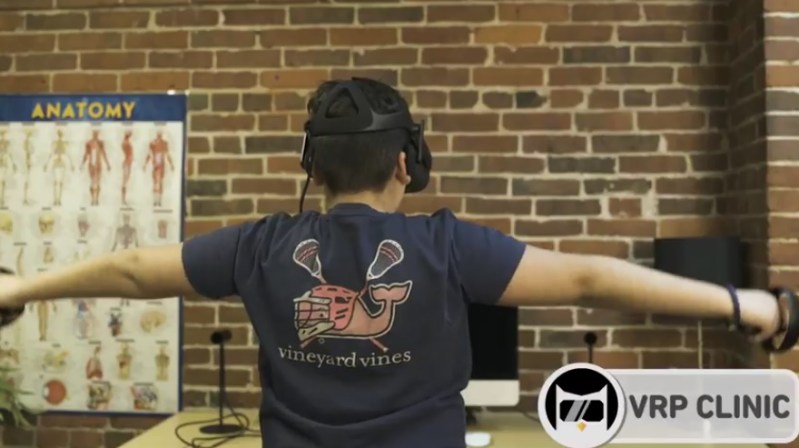 Above: VRPhysio helps patients rehabilitate themselves in VR.

That helps whiplash victims perform one of the common therapy exercises, looking up. And it does so in a way that is more engaging and fun than a boring physical exercise, Orr said in an interview with VentureBeat. In another game, you pop balloons with a sword. Over time, Orr wants to expand to other kinds of treatments for other parts of the body.

You can use whatever VR headset you want. Orr said that he hopes insurance companies will pay for VR therapy, as it can replace inefficient in-person physical therapy sessions. And VRPhysio captures analytics data on your sessions. That tells the doctor whether you are performing the exercises and whether you are showing improvement in your ability to complete the exercises.

“We get four gigabytes of data from a session,” Orr said. “We get data on how you are performing, and we can pass that on to the doctor or the insurance company.”

Those analytics could be important in helping doctors decide whether an athlete is fit enough to return to play after recovering from an injury, Orr said. The company has been testing the VR Physio platform at a hospital in Boston. It also went through the MassChallenge accelerator program.

Orr found that he needed physical therapy himself after finishing a routine flight in his F-16 fighter jet squadron in the Israeli Air Force. He felt pain in his right hand that radiated to his neck. He couldn’t sleep or hold his child, and he was grounded from active flight duty.

It turned out he had a herniated neck, and he learned that it could have been prevented if he had done preventive workouts before flying. He started a program to help other pilots in the Israeli Air Force. And then he started his company, which raised $750,000 in crowdfunding.

Orr hopes that game companies and other software companies will create games that work with the VRPhysio platform.

“The games have to be attractive,” he said. “One way is to make it a family game. Your child, say, won’t be able to move forward to the next level unless you also move forward.”

The company has 13 people, including 10 in Israel and three in Boston. VRPhysio is planning to raise some additional money. The company is charging $300 for the product, and it plans to sell the units to physical therapists.

Here’s a video of VR Physio’s proposition for physical therapy in VR.