VRstudios has made location-based entertainment virtual reality arcades for big commercial venues in the past, but now the company revealed the VRcade Atom, a more compact VR booth with a smaller footprint that doesn’t require an expensive facility.

“Many of our customers are just beginning to consider competitively priced options that will allow them to easily install, with a smaller footprint, a commercial level attraction that can be expanded as LBE VR becomes more popular,” said Ron Davis, chief marketing officer at VRstudios, in an email. “The Atom has been designed to meet all of those objectives.” 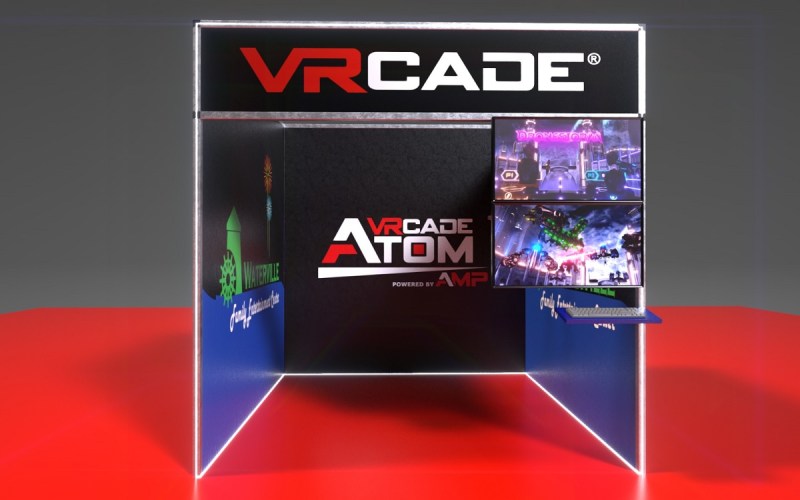 Above: VRcade Atom is aimed at making VR into a social experience.

In addition, arcade companies can augment the VRcade commercial attractions with curated titles licensed from Valve Corporation’s Steam store, all centrally managed through AMP. Atoms can be easily installed as individual systems or in combination with other Atoms, VRcade Zones, or VRcade Arena systems. Utilizing AMP, multiple Atoms can be networked together to increase the virtual player count in attraction titles that support the feature.

The Atom is easy to set up, take down, relocate, or reconfigure. Installations can be done quickly with no special facility requirements or additional infrastructure, such as rigid truss systems. The standard configuration requires only a 10 foot x 10 foot footprint for a multiplayer system, making it an efficient use of floorspace and driving a very favorable return on investment over single-player, wired options.

“The VRcade Atom is another significant addition to our growing family of turnkey solutions built expressly for the LBE operators. It demonstrates our ongoing focus and strategy to integrate the latest and best technology available, utilizing our AMP platform to make it easy and efficient for LBEs to operate on a daily basis,” said Kevin Vitale, VRstudios’ CEO, in a statement. “Atom is a true commercial-grade, wireless free-roaming system, and its price point makes it compelling for LBEs to drop the wires and add VR attractions to their business.”

The VRcade Atom is available to demonstrate and order directly from VRstudios. VRstudios launched in 2014, and it has 55 VRcade installations in 14 countries. The company has 24 employees.