What VR Startups Can Learn From Industry Giants Like Pixar, Lucasfilm and ILM

As virtual reality gradually takes on the filmmaking world, up-and-coming content creation studios in the VR space have a new era of filmmaking ahead of them; but are they ready to ride the tide?

The explosion of VR is driving VFX bigwigs to venture head-on into the exciting realm of virtual reality films, and with experience, resources and infrastructure backing them, established studios are making giant leaps into perfecting VR storytelling.

Where does this place the VR startup that is still learning the ropes of putting in place cost- and time-efficient workflows that deliver? Must a startup learn by trial and error or to tweak existing solutions to their advantage?

Why Reinvent the Wheel When You Can Learn from Grandpa!

Upstarts in the VR space can learn to solve much of their problems from the VFX industry, simply because VFX has been through the grind and teething pains that VR is going through now. Most of the challenges encountered by VR startups have been solved in the VFX space, and some of those issues have taken years to iron out.

Decades of experience producing groundbreaking VFX content has equipped VFX artists to look at VR workflow problems in a new light. So don’t burn your resources perfecting processes that have already been fine-tuned through the 90s! Stop working in a silo—start looking at VR as an extension of VFX and look for answers in the VFX workflows mastered by successful studios.

Going through the same ol’ grind of figuring things out is costly, and not very wise!

As You Scale, Don’t Lose Sight of What Defines Great Storytelling

“A special effect without a story is a pretty boring thing.” ― George Lucas

In the end, what counts most in high-quality entertainment is the story—no matter what medium you are creating for (VR or traditional). Without a good story, even the best visual effects will not help. This is why industry giants such as Pixar, Disney and Lucasfilm focus first on the story and then on how they will go about telling it.

As you would know, creating exceptional animation/VR/AR content takes hundreds of man hours of refinement. No one, however, gets it right the first time. Successful films such as Frozen, Up, Star Wars don’t appear out of thin air— the story gets refined over many iterations. When the film gets into the movie theater studios still don’t know if it will succeed or not. Furthermore, as movie theaters limit the amount of time credits can roll on screen, not all artists—especially engineers—get credit at the end. Yet, everybody involved in the making of a fine feature film gives it their best shot—believing they are working to create nothing short of a blockbuster.

Whether or not your work gets the acknowledgement it deserves, stay true to your craft and to the story you are telling, establish yourself as a creditable studio, and the rest will follow (says my experience!).

Build a Culture of Risk

“Failure isn’t a necessary evil. In fact, it isn’t evil at all. It is a necessary consequence of doing something new.” — Ed Catmull

VR or VFX, ad films or feature-length films, you need to fail to succeed. I’ve seen too many startups become too corporate with success, and eventually, innovation is stifled and creation becomes drudgery. To stay ahead of competition—and to keep creating exceptional content—you need to continue to take risks.

To create a VR production process that is as seamless as is realistically possible, identify the pain points as and when they occur in the pipeline, employ solutions to iron out situations that force you to deviate from the process, but at the same time, prudently include recurring bottlenecks in your project planning. Build expectations that, in the dynamic environment of VR film production, change is inevitable.

This is VR! You can learn all there is from grandpa, but if you’re going to make your mark, you’ve got to step out of the comfort zone.

Virtual Reality is the Future; Be Glad You’re in it

If virtual reality is your thing, never let yourself forget that you are in a field of work that is just beginning to unravel its tremendous potential. This marvelous combination of art, technology and innovation has only one way to go—up and ahead. So, on a day when you can’t understand why you chose to work in VR, remind yourself—you’re one of the few hundreds in the entire world who create spellbinding three-dimensional virtual worlds for a living.

May the force be with you!

Igor Boshoer is a versatile, creative VFX and VR technologist and innovator with feature film credits including The Revenant and The Wolf of Wall Street. His extensive experience building studio technology inspired his company, Linum.io, which has the world’s first cloud-based collection of content creation technology. It aims to reshape current practices in Film, Animation, and VR production to create a next generation studio platform. 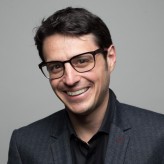